May 31, 2013
A leisurely start to a day bathed in beautiful sunlight. Breakfast, and eventually we sauntered down to Moulin Huet and as it was high tide we sat at the bench above the bay and looked out at the water whitening at the rocks for some time. Flowers everywhere, and only knowing the names of half of them. It is like end of winter in Narnia, and everything magically blossoming.

The tea room with its stunning view of the bay was open, and we had sandwiches and tea there for lunch. Then back down to the bay to watch the tide falling and simply soak up the tranquility for a few hours, perching on rocks and watching small boys fishing from the rocks, and dogs plunging after a tennis ball into the waves.

Sat there for a while doing the meditation of listening to all the noises first near then far: children playing and crunching the stones, the waves on the rocky shore, and the strange gulping noise the waves make under the big rock, then the sea moving across the whole bay and the breeze on the cliffs. Opening your eyes at first the brightness almost bleaches the colour from everything. I love this place.

Back to La Barbarie, where we had a cheeky cold beer before a doze. Then at seven Richard appeared in the van and drove us up to the Vale. An excellent evening with Jane and Richard, enjoying the splendours of their summer house, and Jane's excellent cooking. Richard and Jane touchingly happy for us, and we drank some bubbly to celebrate. Richard in a non-writing phase, and says that his next book will be a book of silence, with blank pages. The glooms of poets are dark. As Wordsworth says: 'The Poet, gentle creature as he is, / Hath, like the Lover, his unruly times; / His fits when he is neither sick nor well, / Though no distress be near him but his own / Unmanageable thoughts.'

Cab drive the length of the island, and before we went to bed at around midnight. Same cab driver as last time who tried to sell us a children's book. Once at the hotel, we walked out into the shadows in the lane and admired the innumerable stars before heading for bed.

Below some flowery snaps, and in Moulin Huet bay at high tide. 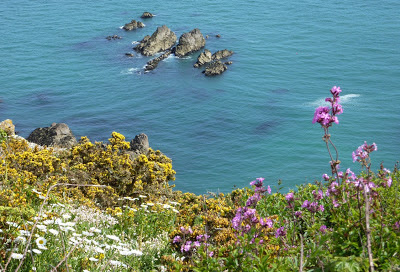 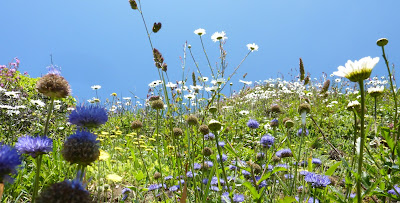 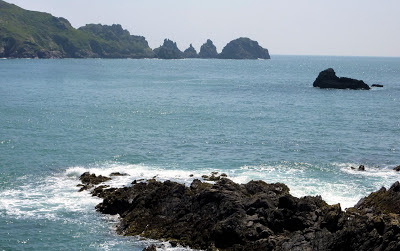 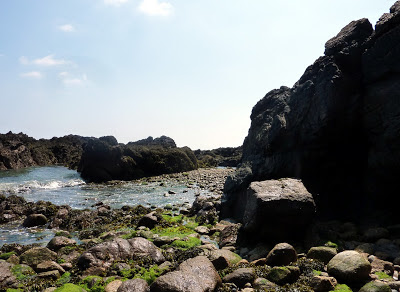