May 24, 2013
Another poor night's sleep which at least meant that I was able to wake Lorraine up when she was having a nightmare that Beth's ex-boyfriend Mark had turned into a cannibal.

Mum up rested and bright as a button. In contrast I felt somewhat jaded. A quorn sausage sandwich helped a good deal however. The weather hideously cold and rainy. Took mum to visit St Bartholomew's church which she liked, then into the North Laine and into a second hand bookshop, where I found a book on Imagination by Mary Warnock, and into Snooper's Paradise. We thought this is a kind of museum of household bric-a-brac. Then to the Giggling Squid, forking down some lovely thai food in a leisurely way.

We popped into see The Blue Route by Finnish artist Kaarina Kaikkonen, which was actually extremely impressive and strangely sea-like for a huge sculpture made from shirts. This made sense of the fact that the clock tower had been clothed in shirts for the last few weeks.

Then into a bead shop, then dropped in for chats and tea with Ken and Janet, and Huss too. Had tea and a good chat there.  Then home and defrosting for some time. Before walking Mum to the station. Sorry to see her go, and we'd had lots of fun, and the opportunity to do lots of talking.

This done I made off to The Shakespeare's Head where I met Lorraine, Dawn and Rosie and Anton. Several drinks and plates of sausage and mash, and several boozes. A fun evening,  and Beth and Laura arrived late in the evening too.

Below the Kaarina Kaikkonen wrapped up town clock, looking rather bedraggled in the cold rain, the rather beautiful Blue Route, a doll in Snooper's Paradise, and some shoes Mum was wanting in a shop window. 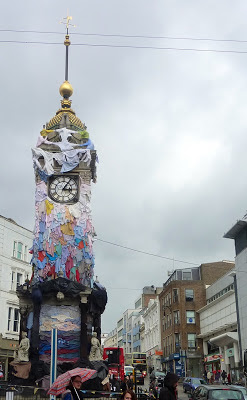 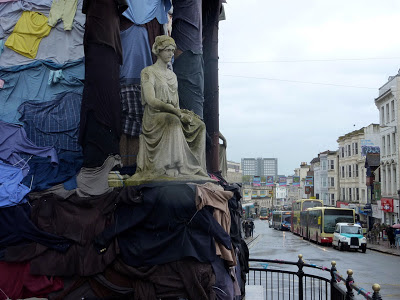 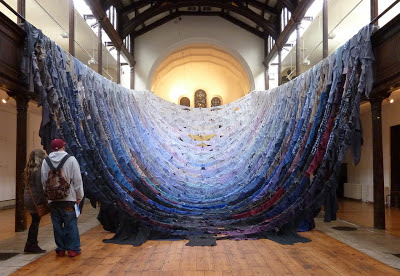 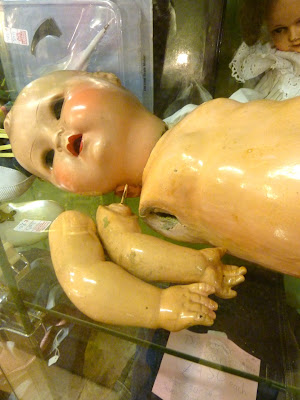 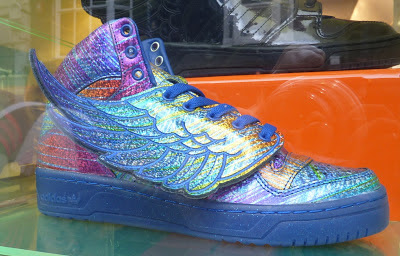