Wet on the outside, wet on the inside

April 13, 2013
Gingerly up after showering I wandered into the balmy morning around to Arkwrights to buys some bread and eggs. Stepping out an hour or so later, after Quorn sausage sandwiches and much conversation Jane, Lorraine were greeted by the first drops of unrelenting rain. Showing people around Brighton in torrents a familiar scenario dating from when Romy and Toby came last year. We walked into town, popping into St Bartholomew's church to wonder at the Italianate design and the vast upside down ark space of the church. Jane really liked this.

Then to the Museum to see the Biba exhibition, which had been on there for some time and I had skilfully avoided. Actually rather more interesting than I thought it was going to be, especially when viewed with the perspective of how much the clothes reminded me of the work of Dr Seuss. Particularly taken with a hat with holes instead of dots. The clothes displays catnip to Jane and Lorraine.

Off then to Specsavers where Lorraine and I picked up our new specs (Jane of course taken to all the most glamorous places) then we popped into Fatface to buy two v-necked jumpers. Marvelling at how sharp things looked through my new specs once we'd seated our dripping selves in The Giggling Squid. Here we engulfed some rather lovely Thai food. L and I had ton yum noodles, delicous soupy goodness and Jane had chicken and cashew nut stirfry. Really good value and lovely grub, although some of us found the chilli makes your nose run. Then out in the pouring rain to the taxi rank and to bid Jane a fond farewell in the rain. Her visit was all too brief, but it had been great to see her.

Then to The Basketmakers. Rather shocked to learn this week that Matt and Wayne have decided to live separately, and Matt has moved in with Irish Tom on a temporary basis. This a big change in Matt and Wayne's lives, and Lorraine and I want to be as supportive as possible. Today this took the form of drinking beers with Matt, John Hood and Irish Tom in the Basketmakers as the pathetic fallacy of the rain teemed outside. Matt keeping things together, and typically trying to take care of others.

I judiciously drank several pints of soda and lime instead of beer, so was in good shape to meet Anton later for a later drink. Lorraine and Matt and Irish Tom were to leave shortly after.

A good chat with Anton and a sedate couple of beers. Anton told me a funny and disturbing story about a mutual friend who, among other things,  has got mixed up in a strange cult believing in aliens.

As it got late, Lorraine called me sounding rather tired and emotional, for instead of going home, Lorraine, Matt and Irish Tom had simply remained in the pub. Went home to find L rather girlsterous and in need of putting to bed.

Below some Biba clothes, which for some reason make me think of Dr Seuss, and one of several grout related phrases in between the tiling in the gents at The Basketmakers. 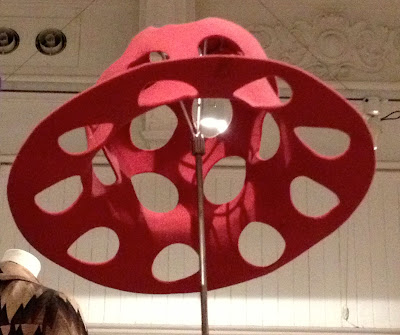 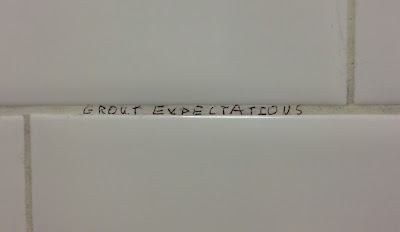