April 07, 2013
Off in the car listening to Laura Mvula to Kent to celebrate Maureen's 75th birthday in a pub called The Windmill, which had an all you can eat carvery. A challenge if ever I heard one. Hearty fare with Pat and Maureen, Maureen's old friend Cindy and Pete, who is Lorraine's nephew. Pat bumped into an old friend, whose wife kissed and squeezed Maureen with protracted gusto. Maureen makes me laugh, and has a funny way of saying things. She told me the food she was unable to eat when pregnant, a story now condensed to: 'Lorraine was fish, Derek and Ken were tinned tomatoes'.

Then back across the rec that Lorraine and her brothers played in when they were kids. The sun actually out and it was a pleasant, if still cool day.  A pleasant afternoon.  We walked past the Sir William Harvey pub, which Pat said is where the great man lived. I only learnt about Sir William Harvey this week, funnily enough, at work. He is the man who in 1628 first established that the circulatory system, heart and lungs are all connected. A strange coincidence. Walked into the garden to take a photo of the statue, and a drinker observed "he looks more like a skellington now".

Then Lorraine went off to collect Beth, and bring her home for some cake and a chorus of Happy Birthday for Maureen. Later Lorraine, Beth and I went to an empty pub, with a knot of tiresome regulars and the worlds least efficient barman. Betty being very funny about her Easter job which requires her to dress up as Hoppy the Hop Farm Rabbit, and do puppet shows and so on. I liked that for several days she had only seen the Farm and its attractions through the gauzy eye of a giant rabbit.

Some joking too about the pub, and when Beth and L went to the toilet together they were singing the Deliverance banjo tune somewhat.

Beth delivered back home to Pat and Maureen's with whom she is staying for the Easter job. She has no days off, but will be in the money, by student standards, once she finishes.

All in all a nice day, and managed to get back in time to watch the highlights of Chelsea beating Sunderland too. So all good.

Below Maureen just about to blow out candles on a cake Betty is holding. And a 'skellington'-faced statue of Sir William Harvey. 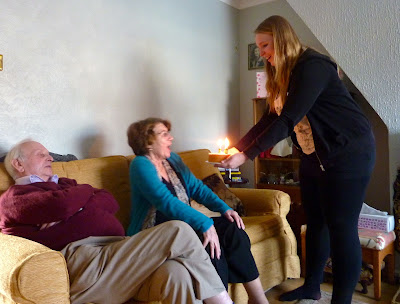 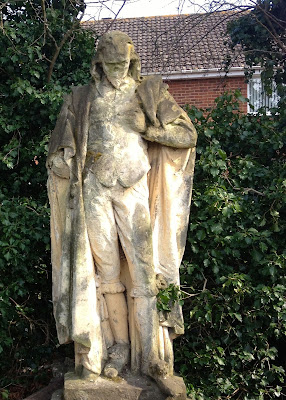