The Flower of Life

December 19, 2019
Up early and sent off two manuscripts, finished some work for my pals in Hampton, which then boomeranged back twice during the day. Ran to the post office, did laundry, including Beth's jeans. She and Lorraine had caught a cab back from Brighton last night after meeting Sam, and Beth had sat in some wee in the cab without realising it.  Into Brighton, bought a few xmas bits, collected a prescription and paid nowt for it, which still surprises me. Rain dodged generally, received vast Sainsbury's delivery, Amazon packages arriving, and found time to slump on the sofa to watch an episode of my guilty Netflix pleasure: Colony.

Then cooked for Lorraine, and went around the corner to Rick's house to collect him and Ben and went to the Park View for a festive beer for a couple of hours. Nice time. In between various gossiping,  Ben saying he was about to start a course on Sacred Geometry and would use this to inform his own work. He said the flower of life, below was an example. Intriguing.

Heard from Gregory in New York, messaging me asking me to  proof for my poem sequence Sin Cycle was now viewable on line, prior to being published shortly. His email had gone into my spam file yesterday. D'oh! Very exciting indeed.

Home the few hundred hards in the teeming rain (again) and found Beth and Lorraine in the kitchen, Lorraine nipping at a small glass of Baileys-like drink, or Faileys as Beth was calling it. All to bed early, one last day for Lorraine. Brilliant.

Like last night, listening to the rain as I fell asleep.

Below the flower of life pattern. 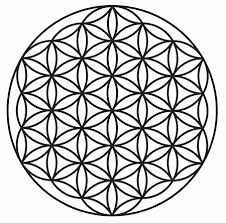