December 27, 2019
Up fairly early this morning, and Lorraine and I sauntered across Preston Park where she showed her wrist to the doctor, who told her to go to A&E, which is what she had hoped to avoid.

We cabbed to the hospital even at 11:30 in the morning it was standing room only. It was a hellish scene with someone lying on the floor vomiting into a bucket, a teenage lad wailing in pain having dislocated his shoulder in his sleep, and assorted other poorly people, and kids with saucepans on their heads and so on, and a man sitting next to me who stank of stale urine. It was an hour before Lorraine was seen by the triage nurse. More time passed and the sister came out and said that they were nine nurses down today, and that the waiting room was so full that only if you were an actual accident or emergency that you should go, and also friends and relatives should go too to make room.

Lorraine persuaded me to go, and I set off walking home, as I was halfway home she phoned me to say she was all done and released back into the world. She was seen by a nurse, who cottoned on that she was a former nurse, and instead of sending Lorraine back to the waiting room to be plastered in a few hours, simply did it herself for Lorraine. The x-ray showed at least one big L shaped crack, but luckily things seem to have stayed in place, so no surgery will be needed.

Lorraine's cab picked me up on Beaky Villas and we were home. I cooked us breakfast, at around two o'clock and then Beth returned with Pat and Maureen having been shopping.

A cheerful night. I managed not to drink anything for the first time for several days, but ate chocolate instead. Beth, Lorraine and I played the banana game, a variation of Scrabble, as well as some cards.

Spoke to Mum today, and told her about Lorraine. She and Mas had a good couple of days, partying with folks on the street, and then off to other pals on Boxing Day.

Below Lorraine with a sling. 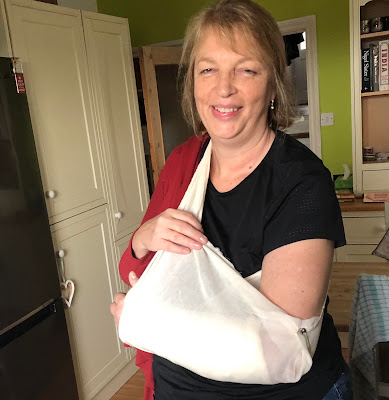