Reunion on the South Bank

December 15, 2019
Up with the sparrows on a Sunday, took my lovely some tea and then rain dodged off to Brighton Station where I met Anton, and we trained up to Waterloo South Bank to meet some of our old IBM pals at 12:30 in what had been billed as a direct marketing reunion. We were a bit early and stopped in a pub across the road from Waterloo called The Auberge where I have often been in the past. £7.50 for two halves of lager, blinking daylight robbery.

Anton and I soon off to Studio 6, at Gabriel's wharf, a trusty old venue. And soon in and hugging lots of old pals, my old boss Jackie, Sue, Brian, Reuben, Marja, Andy Fitzgerald, Sarah Freems, Terry and Jax. Basically sat about having a bite to eat and a few drinks and catching up. Felt really normal to be chatting to them -- and I still have a lot of fondness for those folks. Interesting how many among us had stayed at IBM: Sue, Andy, Anton and Jax. I took an opportunity too to thank several people for their help in former times, and told Jackie she had been the best boss I had ever had.

When we all broke up, and went our separate ways, Anton, Sarah and Brian and I went off to Vaulty Towers, and then to a bar called Bar down the side of Waterloo station. Lots of gossip.

Anton and I trained home, and then had an absolute bloody final in the Shakey Head.

Below Sue, Brian and Anton; Andy and Reuben; Sarah, Maria me and Jackie, 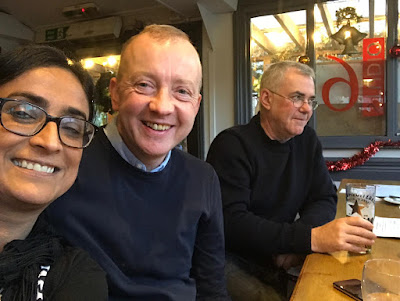 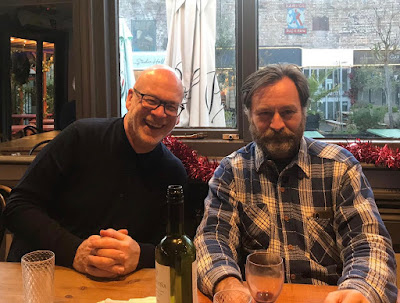 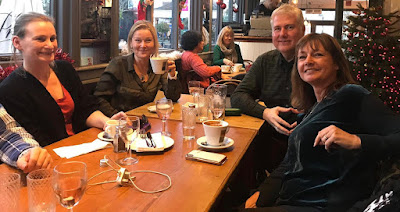 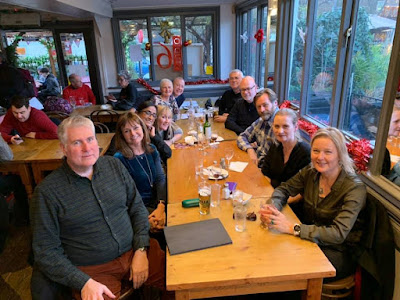