December 23, 2013
A night of anaesthetised unconsciousness alternating with wide awake spells where I hatched projects to design our new house exactly like the hotel we are in. Up early, and Lorraine brought me tea made of roasted tea leaves with a delicious nutty taste. Got ready in haste, and rushed downstairs to an irate tour company woman. We were all late to join the bus tour, and so they drove off, but we hopped in a cab, lurked in a nearby hotel's lobby and caught the bus there instead.

This was a perfect start to the holiday. The bus took us to the Tokyo Tower, modelled on the Eiffel Tower, but larger being 333 metres tall and painted orange and white. All good fun, and enjoyably cheesy "Welcome to Tokyo's Navel". It had a large Christmas tree outside, with lots of festively decorated plastic Towers. The Christmas trees here all seem to have their own music being piped in around them. There is lots of evidence of Christmas here. Romy said that they treat the day as something romantic, and is an excuse for couples to take each other out for supper. Interesting to drive through Tokyo's streets, big and clean, with cool, well dressed people. And eccentrics like the woman in high heels pushing a miniature pram with two miniature dogs in it.

Up in the lift, sporting our free Tokyo Tower badges, to an observatory floor. Amazing views of this huge city.  The parts of Tokyo we saw today are very clean, impressive and modern. There was a part of the observatory deck with a glass floor. I found myself unable to do this in the CN Tower in Toronto but we all had a quick go on it, although my stomach still turned if I looked down too much.

Then we rebounded the coach, with a funny and charming lady tour guide, who then drove us all to the Meiji Shrine, in a dense parkland of trees. Today was a big day in Japan, being the Emperor Akihito's 80th birthday. It turns out that this Shinto shrine is the one associated with the royal family, and by sheer luck we happened on the end of a ceremony, the Tenchosai: "Heaven is long-enduring and Earth continues long". We were not allowed to photograph this wonderful ceremony, with Shinto priests playing a kind of solemn reedy, to rows of important-looking suited officials and a certain amount of mysterious ceremony. Meanwhile others coming up to the shrine clapped twice, I have seen them do this before but I don't know why. The ceremony ended with the banging of the biggest drum I have ever seen, deep and on its side and taller than a man, which I felt in my rib cage. The drum, like lots else here was marked with the sign of the Royal chrysanthemum.

From there we drove past the Diet, the Japanese houses of parliament, through swanky shopping districts and got out again in the Imperial Palace Gardens. I particularly liked the walls of the old Samurai fort, on the other side of the moat, which had gaps between the stones making them resistant to earthquakes.

These gardens quite close to our hotel and we walked back and met Hitomi and the cute little Hana, who looks very much like Hitomi, who is two years old and a bit grizzly through tiredness. We all had lunch I had a Chinese noodle soup which was spectacularly wonderful.  After lunch, and farewells with Hitomi who we will see later in the holiday, Lorraine and I made our way upstairs for an afternoon nap. Still absolutely gobsmacked by the view from this room, over Tokyo to the wall of great mountains beyond.

In the evening we all met up in the lobby and went out for the night. We took the metro, just below the hotel, for a few stops into the Ginza Shopping district, which was bustling and buzzy and great fun. A bit like Oxford Street, but better. At one point Toby was accosted by a cute Japanese Santa girl, one or two or three posses of lady Santas, who gave him a chocolate.

Eventually we caught a cab to an absolutely amazing restaurant called Code Kurkku which Romy and Toby took us to as a wedding meal. Very hip and discretely located, with a lit path to it including a boab tree. Opposite the door of the restaurant is a wall covered with living plants. The food was extraordinary -- a mix of Japanese and Italian cuisine, beautiful and served with theatre, such as the yellowtail fish with Japanese radish in a smoke of cherry blossom, but an immense range of food in little amounts -- sea urchin, salmon, foam of ginger, lobster, risotto, beef sprinkled with seaweed, an amazing pear dessert…. I also had some incredible plum flavoured wine. More than a meal, an experience.

Below: Romy, Lorraine and Toby up in Tokyo Tower, the Tower from below, our tour guide, standing on the glass, outside the Meiji shrine sake barrels and Lorraine and I, Shinto priests after the ceremony, in the imperial gardens; and Lorraine washing herself before entering the shrine. 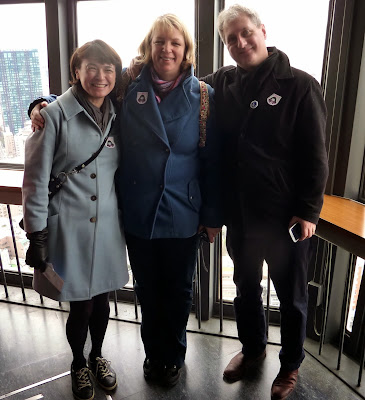 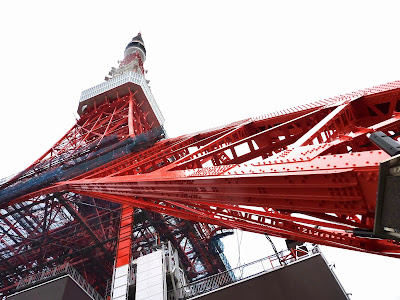 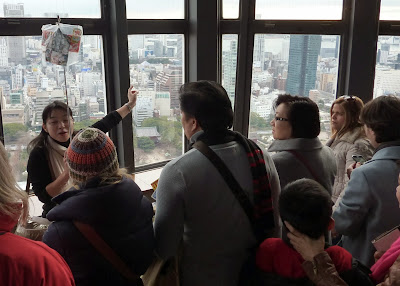 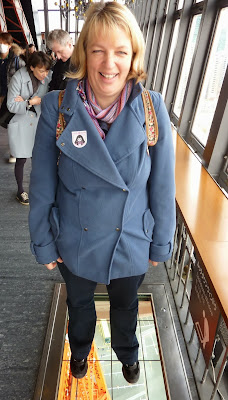 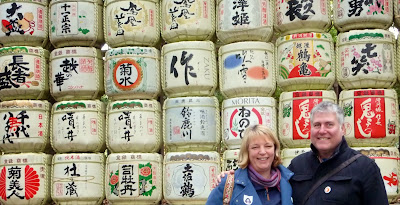 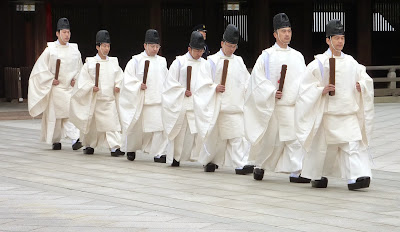 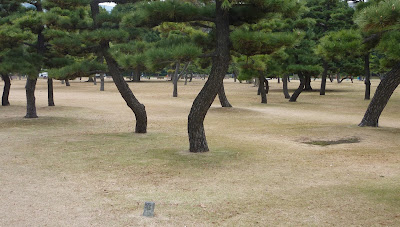 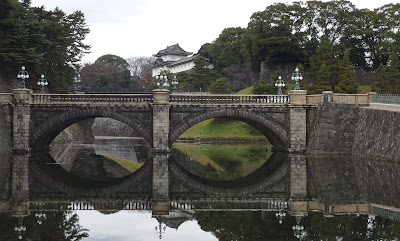 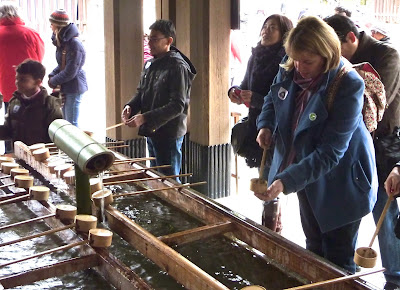 Randwulf said…
Feeling nostalgic for the time I spent in Japan in 1990 and having worked for Bowers English School at that time I've been googling BES and stumble across your blog. If it's not too much to ask and not too weird, could you please pass on my Seasons greetings and well wishes to Romy and her family?

Randwulf said…
Awesome, thank you ever so much!