December 17, 2013
Up to the smoke again feeling very tired after an execrable night of non-sleep, and listening to poor Betty coughing like a docker in the next room. Took the walk around Fitzroy Square at lunchtime, and finished The Good Soldier which I thought was extremely well constructed and containing a rather bleak view of human relationships. A view perhaps not shared by the two men who were passionately kissing with gay abandon on one of the benches. Walked to Eat, and suddenly felt rather faint as I was ordering and for a good few moments worried that I might actually keel over. I soon recovered, but this added a dash of hypochondria to a day that was already far from one of my favourites. But this is the penultimate day at work so mustn't grumble, eh?

Out of office at six like a greyhound with its tail on fire. This fire doused by a lorry driving over a pothole in the street, which sent a perfectly targeted arc of muddy water over me from head to toe. To Dean Street where I encountered Anton in a bar with his friend from the agency he works with, who he insists on calling Mazza. She is a lively, intelligent young account handler. Also a German man called Matt who I also liked a lot. These three had been drinking since lunchtime and were full of opinions. Matt left eventually, having bought me a drink or two, and I went with Anton and Mazza to stand outside another pub to chat more, watch them smoke and be bothered by a series of panhandlers. One of whom, a small but aggressive man with a punch-attracting face, I had to invite to move on.

Anton and I off to Victoria, by way of a cab that went nowhere so we bailed out of it and went to the tube. Anton ate two hamburgers on the train, and for some reason I had a can of beer. Home some time before midnight, to scarfed down a turkey sandwich, before climbing exhaustedly into bed where my lovely wife was already.

Check out Jane's blog with the latest Alison Jackson pictures from the Daily Mail here.

Below the view from Fitzroy Square. 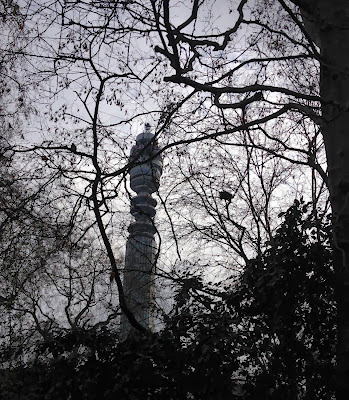