December 25, 2013
The best night's sleep so far sleeping on the floor in a futon, under a huge snow white duvet. The colds that had plagued plagued Lorraine and I now officially in abeyance. Up at nine and off for an an unforgettable breakfast. Romy chose western style, and Toby, Lorraine and I opted for a Japanese, which was unforgettably delicious, with bowls of rice, soup, salmon and plates of dainties.

Then back to our rooms to complete packing to move on to our next hotel a short distance away in Kanazawa. The ladies of the Ryokan could not have been more gracious. They helped us locate the new one, and the lady who had been looking after us led us down the street to our new hotel. Unfortunately this was the wrong hotel, so she secured us taxis on the street and instructed their drivers. This all conducted in her traditional kimono. Warm farewells.

The new hotel where we will stay for the next two days is a just-opened business hotel called Hotel Trusty with impressive Christmas decorations in the lobby and outside. Our bags dropped here we went for a walk into Kanazawa. This is a beautiful town, dominated by the remains of an old castle. Lord Maeda Toshiie took over the castle in 1583 and founded what became three centuries of peace overseen by the Kaga clan.  We took a walk in the gorgeous Kenroken Garden, which was originally the outer garden of Kanazawa Castle, whose origins date to 1676, and we spent much time lurking by Kasumigaike Pond, which has an island called Horajima Island, said to represent perpetual youth and longevity and shaped like a tortoise. The pond contained large and languorous carp which contributed to the Japanese flavour.

After leaving the park we browsed in a shop with incredible local ceramic work and pottery. Some of the work cost thousands of pounds, and was of extraordinarily high quality. From there we popped into Starbucks for coffee and a kind of blueberry pastry, which was surprisingly good and somewhere between a rock cake and a blueberry muffin.

Then to the part of the town nearby which has a Samurai area, of buildings that were originally inhabited by Samurai family called Namura. One of these was open to the public and contained a small museum and a fabulous garden in what the leaflet says is the Kobori Enshu style.

After this we popped into a little restaurant where we had a private room, and Lorraine, Toby and I ate a kind of vegetable curry with tea. Romy had a rice dish with a raw egg onto which you stir into the hot rice to cook. There were more excellent ceramics there, which we browsed among.

Some quiet time late in the afternoon. In the evening off to a nearby restaurant to eat Italian food. A bit of a rough and ready place compared to the the night before but the food was good, and the service friendly after Romy had worked her charm. Strange to see people smoking in a restaurant. We drank beer and wine and talked well into the night. I ended up unexpectedly having a conversation in broken Italian with the chef, who had spent three years in Italy. Home after another highly memorable day in Japan. Christmas day back in blighty, but somewhat better than trying to find something to watch on TV.

Below a spot of breakfast, the party outside, and us with two of the Ryokan ladies, snaps in the Kenroken Garden. They rope the trees here giving them a wigwam appearance to protect them from snow. 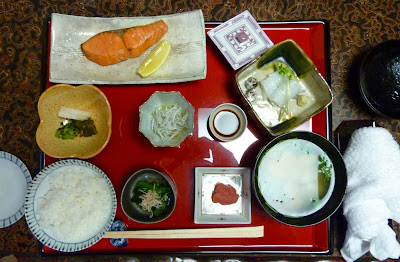 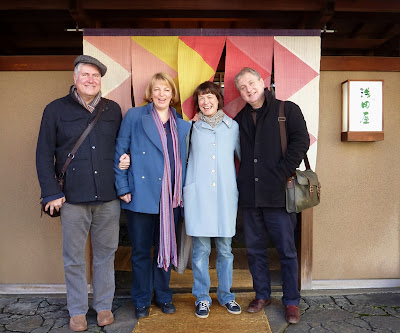 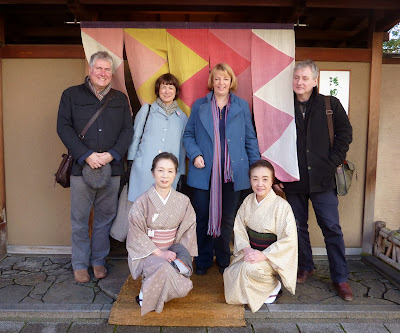 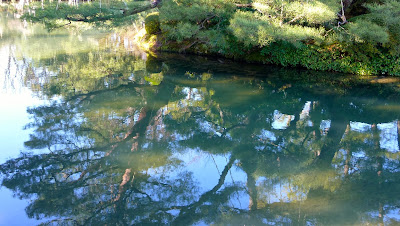 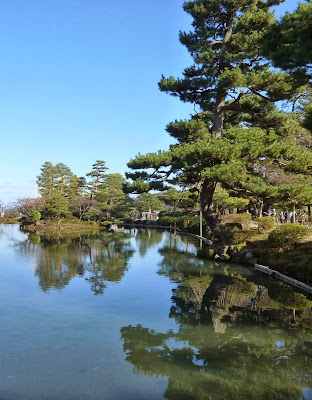 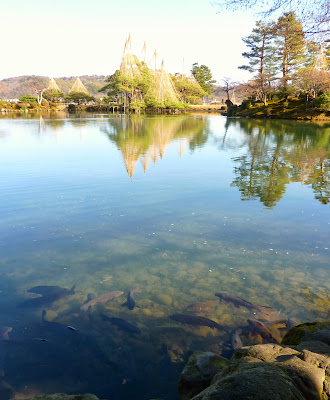 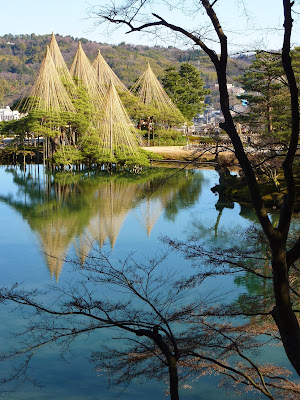 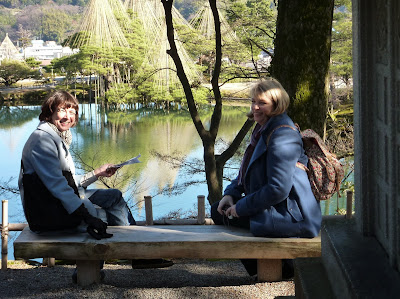