December 22, 2013
Dark night of the soul on board. Lorraine colouring in her colouring book and feeling too claustrophobic to sleep, me occasionally twitchy but mostly just bored. Looked out of the window at stars and the top of the clouds that we seemed to have skimmed over from London to the Sea of Japan. Both Lorraine and I dead beat and snuffling horribly with colds.

Eventually the sun came up again and the end of the journey which I had been following on my plane tracker was nigh. I made Lorraine swap seats with me so she could see Mount Fuji rising majestically to greet us.

At last we had landed, and apart from a tiresome Englishman in his late 60s who was boasting about his attractiveness to Japanese women, calling one of the English stewardesses Miss Bossy Boots, and raving on to anyone who would listen about Mt Fuji we landed and disembarked without incident. Lorraine and I marched through the foreign diseases part of the airport trying not to give ourselves away as being ill.

Romy was waiting for us as we left customs, and it was brilliant to see her. Right away she helped us organise our foreigner's rail passes, which you have to buy in advance of entering the country. Then the short train ride into Tokyo from Narita Airport. From there a yellow taxi with automatic doors, drove us through the pristine morning light with Tokyo looking utterly beautiful. Romy had booked us rooms at The Capitol Hotel, which is in Tokyu, where the Prime Minister has his official dwelling and near the Diat, their government buildings.

A quick lunch with Romy in the Origami restaurant of the Hotel.  Lorraine quizzing Romy on the language and characters of the language. The restaurant was beautiful place, with windows overlooking a tiny garden and pond. Some gorgeous food, and soon we zombied up to our room.

The room is on the 21st floor and has breathtaking views of this immense city and the mountains beyond. The hotel is gorgeous, and the carpets have a wood grain pattern, and it is all lovely organic tones of stone, and linen, and the paper sliding doors and so on. And I have to say the toilet is wonderful too. Heated, so that when you sit on it it feels comfortable and warm, and a range of buttons to jet surprisingly accurate warm water up into you. All very hygienic, and if you press dryer it will also dry you too.

Lorraine and I slept like logs for several hours. Then down to the lobby to meet Romy and Toby, who had flown in from Toronto after us. To celebrate all our reunion we all made off to a nearby restaurant which Romy had booked. A merry meal, despite all the jet lag. Lots of delicious food, and lovely service, and some refreshing beer.  Even the hand held credit card reader was a joy, after you'd keyed in your pin, it accepted it with a Hai! (Yes!) in a woman's voice.

Walked home feeling very happy that we are all here and starting another adventure. The sensation of your mental horizons being widened again is incredibly healthy. I think Lorraine is going to love it too.

Below the sun rises on the other side of the aircraft and catches the underside of the engine, shots taken from our hotel room, looking down on the nearby district by day, and once we'd had a snooze. 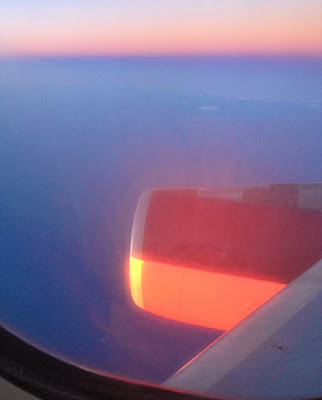 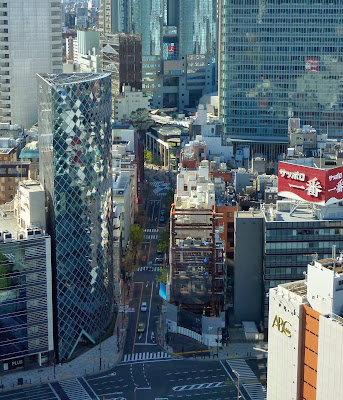 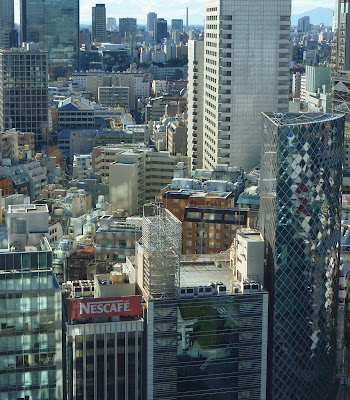 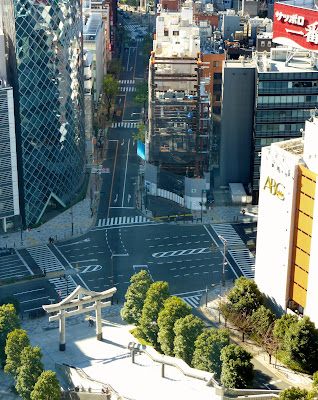 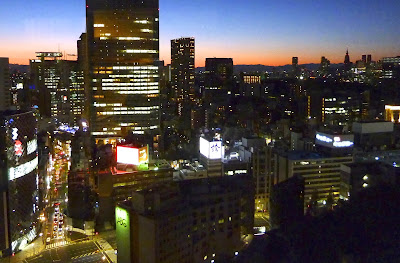 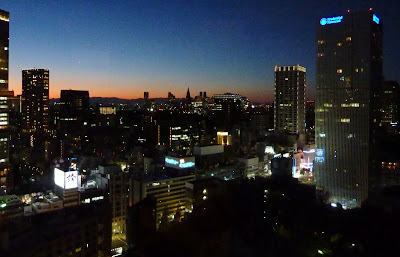