December 10, 2013
Late again to work, the train crawling through the fog up to London. For the second day in a row I am sat in the same seat, albeit a drafty one, and the day passed fairly unremarkably.

Listening avidly to To the Lighthouse, by Virginia Woolf on the train, and walking around the streets, including Fitzroy Square, in a lunchtime stroll. Quite odd to be mooching about with Juliet Stevenson reading aloud some of most best writing I have ever encountered in my ears. Now I want to buy a physical book so I can pore over individual passages of transcendent beauty and dazzling skill.  I'd only ever read Mrs Dalloway before by Woolf, and that I found brilliant. But I think To the lighthouse is absolutely magnificent. One of the best things I have ever read.

Called by First Matie on the bus home, she was in the Mulberry Bush enjoying a drink after the works festive meal. This pub, opposite IBM is is where Reuben, Kate and I went for our first drink together many years ago. Kate had a cider, which put both Reuben's mind and my mind at rest, having just hired her.

Home after 8:30, Lorraine training governors, so I cooked for us listening to the last chapters of the book. Both of us compelled to drink a glass of wine and sprawl on the gold sofa before an early night.

Below more snaps of Oxford Street, and the purgatorial multitudes around Oxford Circus. 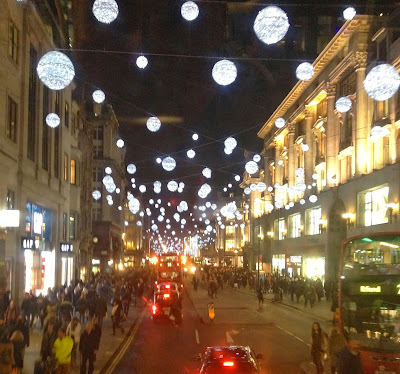 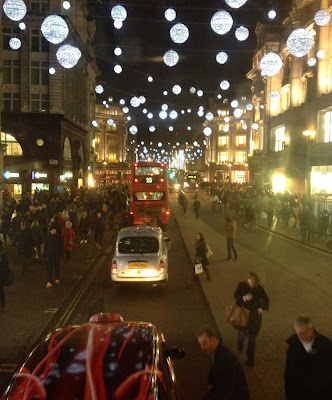 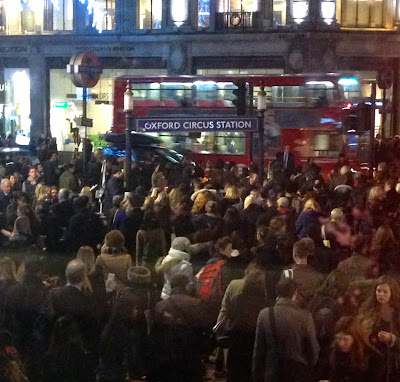 To the lighthouse Virginia Woolf