December 29, 2013
Kayotei Ryokan is famed for its Japanese breakfasts which Lorraine, Toby and I opted for this morning. An unbelievable feast. One element kelp leaves, the size and shape of rosemary leaves, but they carried an unbelievably lovely savoury punch, a bit like marmite, and delicious when added to a bowl of rice. There were eggs, and fish and pickles and kipper like fish that were grilled over hot charcoal at the table. Amazing.

After breakfast the slightly sad business of packing. I loved being at this Ryokan. There is a shrine to the poet Basho nearby, and Jiro was kind enough to lend me some wellingtons and took me to it, and showed me a posting box nearby where poets post their haiku which are then judged in a yearly competition and prizes are awarded. The shrine itself was locked but peering in you could make out a small statue of the poet sitting in a Buddha like pose. We also discussed the chrysanthemum poem, and Jiro explained that chrysanthemum tea was something drunk by the Chinese to promote longevity and health. So the poem meant that the baths were so good that you didn't need other remedies.

Chrysanthemum-shunner Lorraine had opted for another dip in the onsen, Toby and Romy were out and about, and I walked along the river at the bottom of the gorge, very picturesque and beautiful. I passed three or four young couples, one particular walking with romantic awkwardness along the snowy path, and I deployed my politest 'konnichiwa's.

Back and bade a farewell to Jiro and his staff. Our bags being walked out to the taxi by ladies in kimonos, and Jiro and his son who is studying in Vancouver.  The taxi took us back to Kagaonsen, with a giant Buddha rising above it. This apparently is a folly built as a memorial, but unfinished and the cost of maintaining it is a sore point in the local community.

Then Toby and Romy headed off to Makinohara, and Lorraine and I set off for Kyoto. We arrived on the platform, and only later realised that we had left a bag in the ticket office. I ran back and it was there untouched. Romy and Toby have been our guides and safety blanket so far, but it was good for us to challenge ourselves and set off alone. But our train arrived exactly on time (they always do here). We had to heft our cases down the train to find a non-reserved coach where we found seats either side of the aisle, and had a pleasant journey through snowy mountainous country. Lorraine and I got out at Kyoto and after finding a map, and realising we were on the wrong side of the tracks, then found our hotel with incredible ease. And we were soon in our little room having a cup of tea before heading out again into Kyoto. We wandered around the streets above the station, where there were two huge temple complexes, we also walked through lots of little back streets, which were very pretty. Near the station there was also an English Pub, full of Japanese men smoking, which of course you cant do in England.

After rubbernecking around Kyoto for a couple of hours we decided to repair to the hotel, and having had no lunch, brought ourselves two rice balls, wrapped in seaweed with some salmony fish in the middle to tide us over. We sat on the bed watching Japanese TV and drank a couple of cans of Asahi, ate the rice balls, and packet of crunchy snacks, which included wee crunchy fish alongside the nuts and crackers, and then, slightly shamefully, fell asleep. Waking again in the evening and not feeling hungry, we simply stayed there and slept like babies.

Below the last of the Kayotei; breakfast fishes; a vase in our room; Basho's shrine; scenes from my morning constitutional. 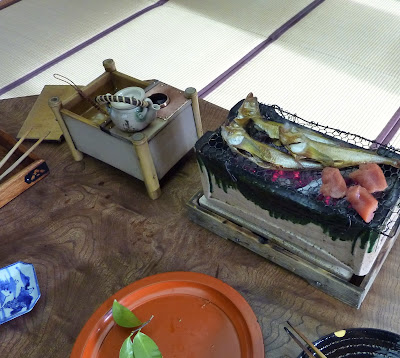 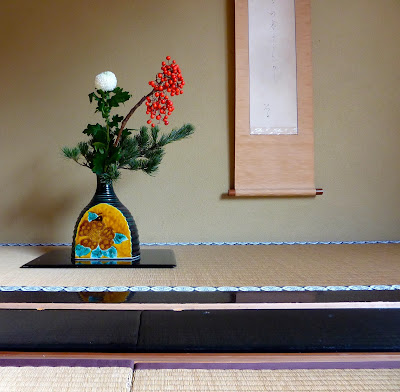 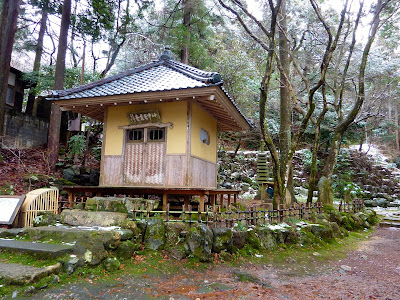 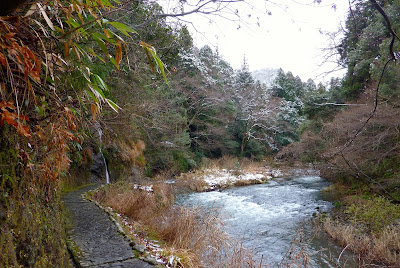 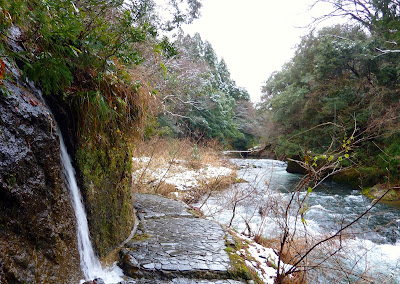 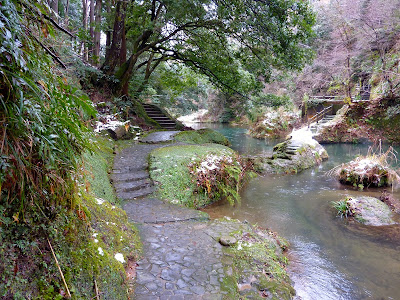 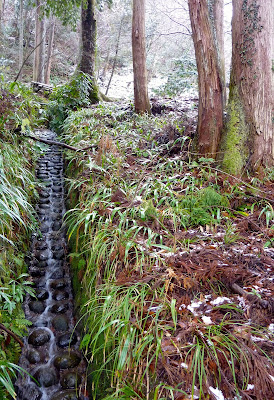