Japanese luxury in the Asadaya Ryokan

December 24, 2013
A splendid clear day in Tokyo, I pulled back the curtains to reveal the city in its all glory seeming to stretch to the distant mountains. A frenzy of packing for today was the day we began the next leg of our journey. Lorraine and I met Toby and Romy in reception and then took the lift down a couple of floors, then a mazy walk through subways till we caught a train for a few stops and arrived at the Shinkansen station. As we had to wait 50 minutes for the train, we had a light breakfast in a cafe. Lorraine and I braving the purchasing transaction, but this being Tokyo this was done fairly easily.

Into the Shinkansen. This really is the the rock star of trains. Our reserved seats were in the lower deck of a two deck coach, however, so we arrived at the next station at ankle level. So to see things we popped upstairs and stood in the 'vestibule'. Tokyo seemed limitless as we headed north through the city, but eventually the built up areas began to thin until the train bulleted through tunnels in mountains and we emerged an hour later in a winter wonderland. Glimpses of steep sided wooded hills, whitening out in the falling snow. At Echigo-Yuzwa we got off the bullet train and changed to a more local train, which by UK standards still pelted along. This took us East. The snowy lands abated and we found ourselves travelling alongside the coast of the sea of Japan. At one point the pressure for space was so great along this narrow strip that we passed an elevated road that ran for several several kilometres over the seashore.

Kanazawa station rather beautiful. And we hurried out to grab a taxi to the Asadaya Ryokan. Ryokan is a kind of inn. My arrival with Lorraine however lacked a great deal in dignity. Needing two taxis due to our luggage, the party split in two groups, with Romy asking the taxi rank man to send our taxi to this destination. After some struggle with our luggage containing all you need for a four month stay in Japan, the taxi driver sped off before the taxi rank manager could speak, turning to me with the Japanese equivalent of 'Where to guv'. I found my notebook and said the name. A stand off of mutual incomprehension until we managed to persuade him to return to the rank, and the taxi rank guy told him were we were wanted. A slightly anxious drive, and then arrival. A tiny woman older than me waited in greeting, waving in polite greeting. She dived straight into the boot of the car but there struggled with the case. I paid and tipped our long suffering driver, and Lorraine and I dragged our cases into the Ryokan. However this was not etiquette and the older lady and a few other birdlike ladies in traditional dress wrestled with us until we released them. These joined Toby and Romy's cases which were being washed before brought into the pristine interior of the inn.

Into a room where we were pleased to find Toby and Romy. We were all given a refreshing cup of seaweed tea, flavoured with plum and salt, and asked to fill-in a complex form, detailing any foreign disease we might be carrying, and what kind of breakfasts we wanted, and if we had any food allergies and if we could eat Japanese food and if we wanted geranium pillows, and at what time did we want to eat and bathe.

These niceties sorted we were shown to our rooms. Lorraine and my room enormous by Japanese standards, with the cleanliness and order and simplicity of excellent taste. Tatami mats, paper sliding doors, and a windowed area looking out on a tiny garden with running water, moss, fern and laurel. We sat about orienting in this haven before being taken in bathrobes off to the family bath room, where Lorraine and I washed the dust of the journey from ourselves with showers and soap before plunging into the deep bath with a jet of hot water massaging the stress away. I plunged in first and sent a tsunami of water over the edge.

This hippopotamus business done, and warmed to the core off to change into kimonos and Lorraine had a quick Skype with Beth, then we were invited to join Toby and Romy and eat the second astonishing feast in as many days. There were 11 courses. Often with tiny amounts but everything utterly exquisite and memorable. We started with appetisers of steamed egg custard with shrimp and lily bulb, sliced sea cucumber, sweet potatoes, yellow tail fish mixed with miso, sweet fish roe, and squid. A clear soup with crabmeat, sliced raw fish which was melt in the mouth delicious, steamed cod, chrysanthemum leaf and kelp with a citrus dip, deep fried prawn, spelt mushrooms and lotus roots, grilled fish with seaweed and wasabi, grated daikon and ginger shoot. Braised Japanese beef, whittled burdock roots, and trefoils; vinegar course of snow crab, cucumber and pink ginger, rice and pickles, miso soup with fish balls, white leek and daikon, and a dessert of persimmons. This accompanied by sake and beer.  A beautiful, beautiful meal served by women in kimonos bowing and attentive and charming. An amazing cultural experience -- and an amazing festival of tastes.

After this to bed. Because of the purity and cleanliness of the food, we did not feel as if we had overeaten. Just stunningly beautiful food.

Below a snap Lorraine took of men climbing up a nearby building, Toby Romy and Lorraine at the shinkansen station, a snowy turn, our room at the Asadaya Ryokan, a cup of tea and a dainty served to us early on, sitting down to our feast, me with a Shogun face. 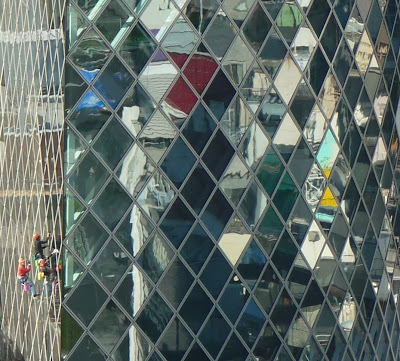 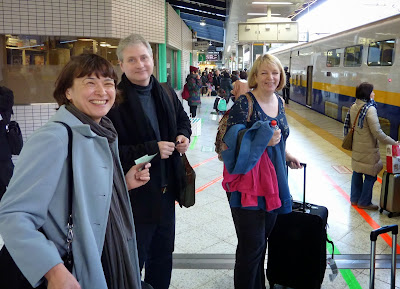 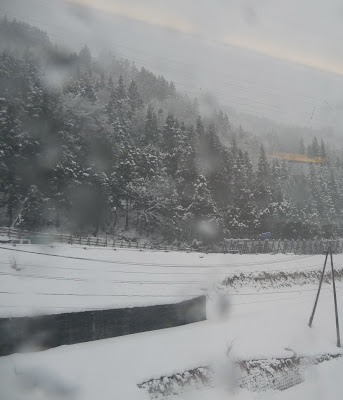 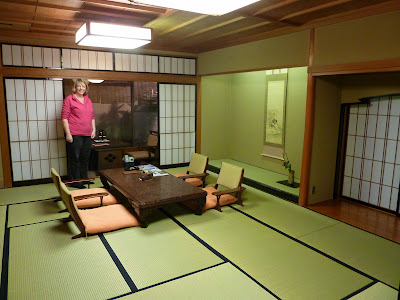 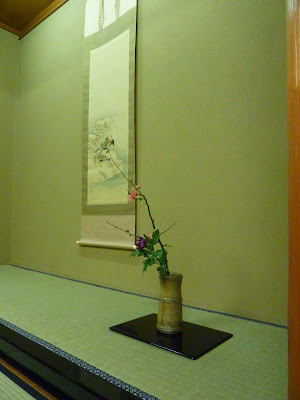 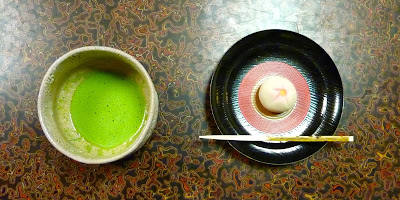 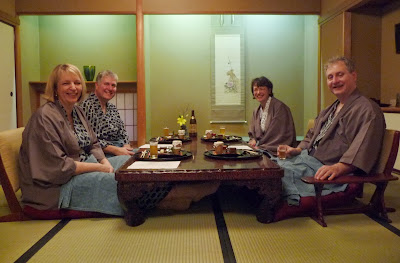 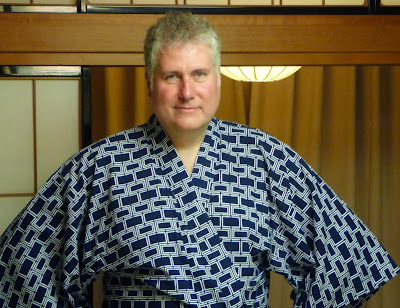