March 18, 2013
Couldn't help noticing Mercury has just stopped going retrograde and is now progressing. Pure coincidence, of course, that I received the months overdue letter from the tax office notifying me of a repayment. A cheeky grand and very welcome - and not just because I won't have to keep asking my accountant to chase the effing thing every two weeks.

I slunk back to the gym, and managed half an hour's creaky trundling on the cross trainer. While I have a long way to go to get back to anything like fit, it made me cheerful (and tired). Met Claudius in the changing room and had a chat with him about poetry to the bemusement of the narcissists and sweaty jocks about us.

Talked to Janet, and will visit Ken tomorrow as he is bored before his op on Thursday.

The excerpt of the business book I have sent to several friends already has had some very useful and thought provoking feedback. In this hiatus, reworking and expanding Defenders of Guernsey  and removing one or two glaring errors. Very useful to have read some of it to the little group of girls in Lorraine's school the other week. They were transfixed by the first chapter, and then I realised that the second chapter, which I did not read, was too abrupt a plot jolt to be entirely satisfactory.

After zooming home and eating our 'plated dinners', i.e. second helpings of yesterday's roast and veggies, Lorraine out this evening getting ready for the Hullabaloo concert next week. Not feeling like reading, I watched my DVD of  David Lynch's disturbing Inland Empire and managed to creep myself out with it. Like all Lynch films, the dream logic makes more sense when you have seen the film more than once.

Below Grace Zabriskie, one of Lynch's regulars, being wonderfully weird in Inland Empire. The kind of mad expression I sported on receiving my payment from Inland Revenue. 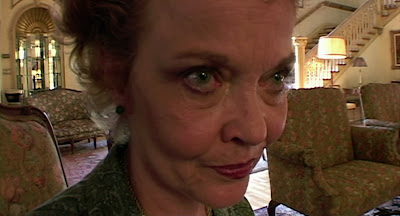