March 30, 2013
Another slow start to the day. Lorraine who has been nursing a cough in much need of recuperation, although still gripped by urge to work herself to the bone, which I talked her out of after we dragged a few objects around, and a stock take of the paint in the house.  In the fine non settling individual snowflakes I walked off to see Janet and Ken for a cheery cup of tea and a chat. Heartening to see Ken a good deal better than of late, and having been walking about quite a bit. He has a nasty cough though, which is gradually improving.

In the evening Lorraine and I took ourselves to The Duke of York to see In the House an enjoyable French movie about a boy writing stories about a family he is insinuating himself into. We sat up in the balcony on a sofa, enjoying a tale of how the boy's stories were read by his teacher who considers them promising, and gets drawn into the web, eventually losing his job. It is unclear how true the stories the boy is telling are, and where the line between fiction and reality is drawn. Enjoyably French fare, and refreshingly intelligent and quite funny in parts, especially the parts featuring Kristin Scott Thomas, playing the school teacher's wife in elegant French mode, running an art gallery purveying sexual imagery, and art made from blow up dolls and so on.

The teacher, played by Fabrice Luchini, disconcerted in his wife's art gallery. In the House (Dans la maison) very well worth seeing. 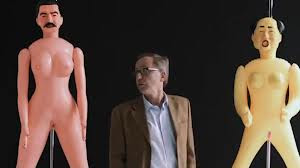