February 28, 2013
Disgusting dream just before waking, tearing hand-sized, spidery, hermit crab-like things from my legs with a pair of those grabby, long-stemmed egg holders. Calliope doing clawing happy feet on me when I woke, which may have added to the dream's horrid realism.

Caught up with Janet: Ken has improved a little she told me, and has lots of visitors. She said yesterday he told a joke and had sung a little. Decidedly more Ken-like behaviour. For the time being I am not adding to Ken’s exhausting guest list till the family, staying with Janet, have all visited, but will keep close tabs on Janet.

I did some good, but tooth-grindingly slow, work on the business book. Progress of any sort hard to come by. In contrast, Lorraine’s long day was action packed, with her taking charge of the school she works part time at. She had the local press in, a flood, a powercut, and parent problems to deal with, as well as an important meeting after school, which must have gone well considering the grateful texts she received when she got home.

Sonya told me that one woman she was working for became really jealous when Sonya went to Egypt. She told Sonya that cleaners shouldn't have holidays, then let her go. Sonya able to laugh at this. Her good humour shines through her limited English. As I went back upstairs to work she told me I should write fantasy stories like Harry Potter and make lots of money.

L and I went to meet Matt and Wayne in Hove after work. We had to abandon plans to visit the Hove Tandoori, as Wayne had spied a shudder-provoking ex-boss in it. Sadly our alternative restaurant dire, and I had to send back a bottle of undrinkable wine. All redeemed by splendid company however. Matt preparing to conduct a programme of John Cage’s work, Wayne excelling in his current guise of kitchen designer and salesman.

Below meanwhile in Guernsey Jane, whose birthday it was on Tuesday, slices into her delicious-looking cake. L and I thoughtfully sent her a pair of Kinky Knickers, only right and proper for a sixtieth birthday. 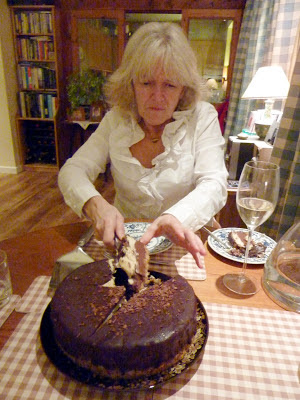