April 22, 2020
Today was Lorraine's birthday. An early cup of tea in bed, I gave her my card and and a little Japanese fan I had bought some time ago, in lieu of future travels. Beth bounced up as the Birthday Elf with presents and cards from a few other folks. Including a nice picture of three grey hearts she had bought. After breakfast, Beth had organised a series of zoom chats throughout the day, with Pat and Maureen, Rosie and Innis (and Pippi). Nice to see people's faces on screens.

I also worked on the SKTV, uploading an episode this morning. I also spoke to Anton and young Oskar whose birthday it was yesterday. Lorraine and I went for a quick walk this afternoon, around Blakers Park. Lovely day. Had drinks outside early evening, and then spoke to Sam and Jade. Sam's beard now grown to OT prophet proportions. Felt full of affection for them.

We had a delivery curry this evening, and we drank some bubbly and I drank several beers. Beth Lorraine and I played Euchre and the card came golf into the night.

Below Lorraine, and the birthday balloons Beth had secret squirrelled into position, having borrowed them from Rosie. And a new sign stencilled at every entrance of the park. 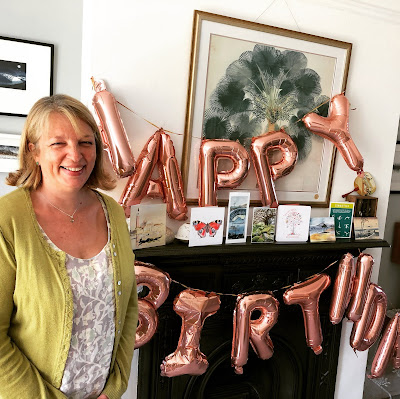 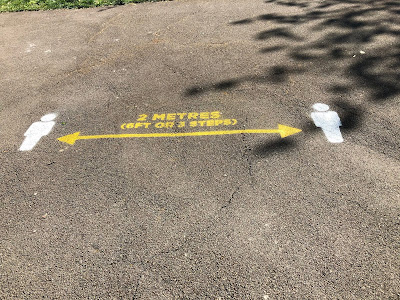