A trip to the pharmacy

April 16, 2020
The days blurring a bit, one into the other. I got up early, determined to get on with things. I billed the three agencies I have been working with, my lovely Parisienne friends paying me within the hour.

Thanked Robin for a gorgeous notelet she had hand made, including a recipe, a poem not by her, art work and information about knots (a favourite RH subject). I will treasure it.

Uploaded the next episode of Magnificent Grace onto Skelton Yawngrave TV, and recorded Friday's one.

Went down to my usual pharmacy. The reality of the shut down starker here. Queued outside the pharmacy, with people observing proper social distancing, and being let one at a time into the shop. Saw the guy there who I have known ever since I moved to Brighton. Had a quick chat with him, asking him how he was doing and so on. Bought some bread on the way home, and generally gave everyone a wide berth. Around that area are generally some people who have fallen on hard times, with addictions and homelessness. While everyone now has a place to sleep, apparently many of these folks still prefer to be on the street because it's where their community is. Now most other people are off the street, it lent a post-apocalyptic atmosphere to the place.

Feeling quite pleased with myself, I had a beer outside in the garden, as the sun came out a little later in the day,  and popped to the off-licence nearby. It was empty fortunately, and the guy there has now installed a perspex shield on his counter. Chatted with him. Lorraine and I spent a relaxed evening together, Beth working again today.

Below snapped this when I was third in the queue outside the pharmacy. Posters on the pharmacy
windows. 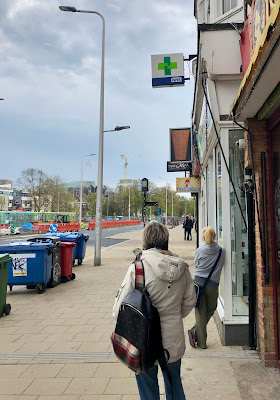 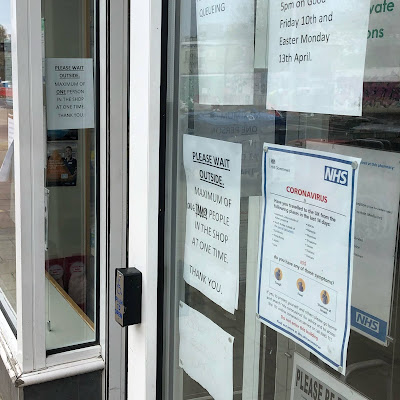