April 05, 2020
Sunday, and the first properly warm day of the year. Lorraine and I spent much of it pottering about in the garden. Digging a tiny bed, and cutting a dead bit of a bush off and so on. I bought L a trug last year, and we filled it with compost, and planted seeds of little salad leaves, carrots, beetroots and broccoli. In assorted pots, we sowed peppers, dwarf beans, radishes and tomatoes. The brands, peppers and tomatoes have been brought indoors.

Chatting to several neighbours. Caroline next door, Amy down at the end of the garden, and a tedious blowhard whose penis we often see as he stands naked by his window.

Beth busy most of the day attending a virtual drama conference, for one of the stage schools she works with.

Succumbed to a couple of rum and cokes on the terrace in the heat. Chatted to Anton, who is feeling the quietness now my Godbairns are with their mother. His work, which had been screamingly busy, is a bit quieter now.

Indoors and ate a Sunday roast, and watched the recording of the second half of the play One man two governors, from the National Theatre.

A happy day, keeping busy and having lots of sun helped. I popped out to the local shops to get bread and milk, but when I went it was thinly populated and came near nobody. The woman in Choice Cuts looking thoroughly miserable, as she often did even before this crisis.

News that Boris Johnson now hospitalised. Much as I despise his politics I wouldn't wish that on anyone.

All the lager gone from the fridge, I finally steeled myself to drink this sour beer Sam had left with us at Christmas, and had been in the fridge ever since. L and I shared the can. The drink was exactly the colour of the can. It was sour, but full of flavour, but I am not sure I am a convert to a pink sour beer tasting of damson and cherry. 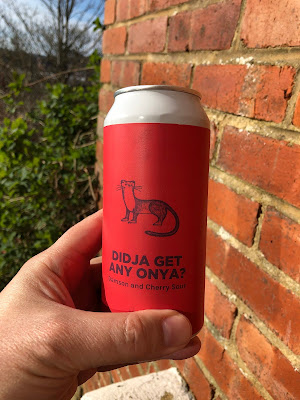