A third day of hibernation, with Lorraine having a day off in lieu of the day she will work at school during half term. I have to go outside eventually, as it makes me feel very antsy not walking.

As Lorraine was off, I only worked for a short burst, editing the Rhona interview. I contacted her to re record one of the poems as there was a bit of bippety boppety interference in the original I had not noticed at the time. Also did my first spot of billing for 2021, which was cheering -- and I have another smidgeon of work later in the week -- and even the faint possibility of some the following week.

Heard from Tess who is kindly proofing some of my short stories. She queried my use of commas. I have  become increasingly sloppy over punctuation over the years. So it is really useful to be able to access her brain on this.

Lorraine playing Nintendo games quite a lot today. I joined her playing Mariocarts, which I enjoy, although the multicoloured landscape you zoom through overloads your visual cortex in the end. I pressed on with the Weird fiction in the late twentieth century book.

Gloomy news about the South African variant of Covid, which the Oxford AZ vaccine does not work well against. There will be a time when we all just get booster vaccines like the yearly flu jab, I suppose. The news cycle is fascinating at the moment. Oscillating between highs and woes. Overall figures are now steadily abating, after all the appalling deaths in January.

Below the wild afflictions of The beast from the East this morning. In fairness though it is cold, and was zero or below all day. 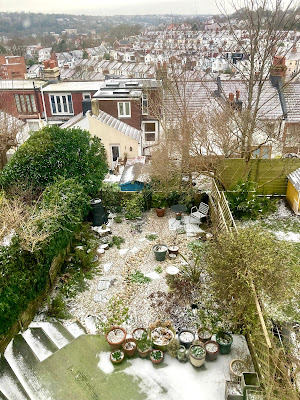