A moment of glee

Dreaming about owning some kind of moped last night, and was delighted with the novel idea that it could take me places. The dream was set in London and several years ago. I showed it to a dream Michel, and the French Bloke was surprisingly impressed with it.

Lorraine back to work. But started working on poetry and toying with the idea for a new short story which flowed nicely. The wind slightly taken out of my sails with a rejection of Diabolus in Musica from The Fiction Desk, who I was trying out as they publish ghost stories and wanted fiction about music. I was a bit dubious about them before I sent it, and despite receiving the friendliest of generic rejections, I shan't be submitting to them again.

Visited Charlotte's blog again, and she has a link to a wonderful talk by Brené Brown called The Power of Vulnerability.  Vulnerability is not something to be avoided. When I interviewed her she said she was trying to write from a place of honesty. This of course exposes you to feelings of vulnerability. It really resonated with the way I have been trying to write my own poems lately. I have a sense I am travelling somewhere I have not been, and Charlotte is a kind of pathfinder.

Otherwise spoke briefly to Rhona this evening and got her to rerecord one of her poems where there was a bippety-boppety interference underneath.

Strode up to Hollingbury Hill again. A genuinely icy blast of a wind from the north east made my face hurt. Felt authentically Iron Age, and properly cold in the face in a way I have not felt for years. A small dog ran at me barking and growling at my feet made me start out of my walking reverie. I wonder if dogs don't like me because they can tell I don't like them, or because they discern I am a wrong 'un in some way not immediately visible to humans.

Once out of the wind it was nice, and a woman walking a different mild mannered dog nearby cried out to me in glee. The sun! when the the lovely whiteness on the top of the hill was suddenly illuminated against the dark skies.  A random moment of shared glee. 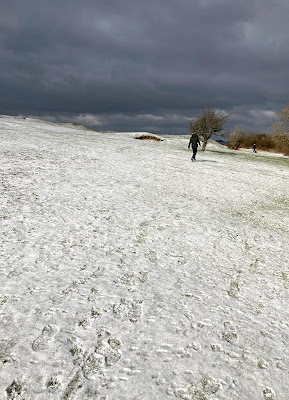 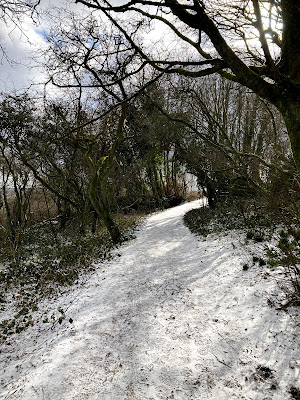 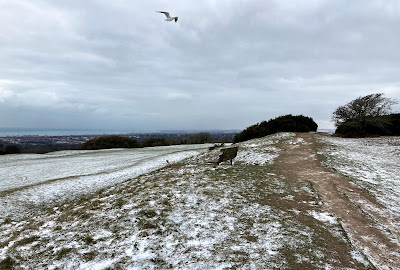