Sauntered onto the scales to weigh myself, as Lorraine and I had a word with ourselves about snacking earlier in the week and have taken back control. I found, when weighing myself this Monday, that I wasn't as heavy as I thought. And since then I have lost another cheeky kilo. Later looked at an app where I have entered my weights and I find that in the last couple of years I have kept a steady 8kg under what I had been maintaining a couple of years ago. Just nudging down a bit now will stand me in good stead.

Up early and getting on with a bit of copy for the job with Keith, then looking at Keith's wee face in a square on my screen as we worked via GoToMeeting, his favoured way of connecting. We'd done the work by midday, and the clients seemed very pleased, and told us we'd work together again. Something pleasing to the ears of the creatures that live in the dark reaches of the Kenny coffers.

Even more pleasingly, I was contacted by Pat today, with a smidge to do next week too. Baby steps, but far, far better than no progress at all.

In the afternoon, broke off for a quick walk, having been manacled to my desk the day before. Spoke to the solicitor's assistant who called me on the way home. Spoke to Mum this afternoon, and then Toby in the evening.

Hoovered the house washed the floors this afternoon. Lorraine home fairly early, and we ordered an early curry from Shahi, then I went up to join a zoom book launch  by Sonya Smith which had been exhaustively publicised by her partner Michaela. After twenty minutes of not being able to connect, a message saying audience had reached its limit of 100 people.

Simply repaired to the gold sofa to chat with Lorraine instead, and watched the second episode of Death In Paradise and drink a cold beer or two.

Below another of my dark black and white shots of the sky and light on the distant sea. 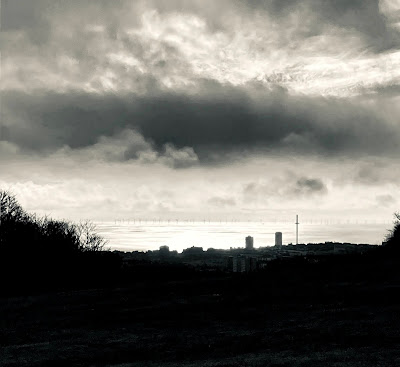