Working with Keith again. Took a morning brief from my chums the French Bloke and Pat on something that proved to be a bit tricky -- and it felt a bit of a slog and I was left with a feeling we hadn't quite cracked it yet. Told the old FB that my dream version of him had looked approvingly on my dream moped.

Happy to be gainfully employed, however. Talk of another job with Keith next week, and at one point we had been booked in for two days, which was then cancelled an hour later. Cue Keith raging about time wasters.

In the evening wrote to the solicitor about Mum's neighbour issue, and crossed his palm with silver. Mum doesn't want to inflame relations with her neighbour so I have just asked for his legal opinion on the matter.

A short evening walk listening to a bit more of Bleak House as Lorraine was having a zoom meeting with governors. Dickens' plotting is amazing, considering he wrote the thing in chapters which were published as he wrote them. He began writing it in November 1851, only four months before the first issue appeared, and did not complete it until August 1853, just one month before the last number was published. So there was no opportunity to go back and rewrite. To be so sure of your powers as a writer to do this is impressive.

At lunch went for a 20 minute oxygenating walk around Blaker's park and local streets at lunch and got back in just before the light snow flakes started again. It is not settling. Loved the sunlight on the white buildings and the forbidding dark skies. 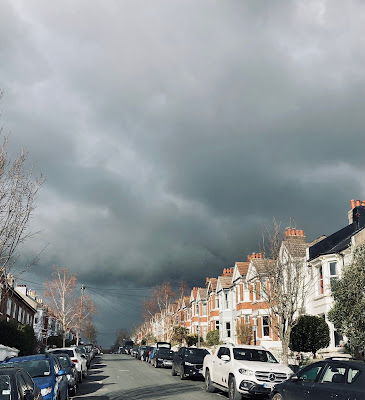