July 03, 2019
A couple of walks this afternoon, the second of them in and around the hill fort. A glorious day. While doing so I was sliding back and forth in time while listening to the end of The Time Machine, which I had first read it when I was about twelve. I'm not sure if I have read it much after that. Lots I had forgotten, an interesting and influential story.

Worked otherwise endlessly editing my own story. I have accepted this is going to take a while, but I feel certain now I am improving the story as I work, which is a good feeling. Based on comments from the editor, I have looked for similar problems in the text and have found them. Fixing these is really making the story sing. Slow but good work. Broke off to watch the second half of a documentary about the rise of NeoCon Fascism in the USA, and those who oppose it. My story -- against that sort of thing -- is well timed I think.

Salad tonight. I weighed myself and am still losing weight which is good. Lorraine having a tricky time at work, having to do more this evening. I did some billing, then as Lorraine wanted to read her book in bed, I watched another episode of the Tales of the City. Two blokes at it like knives when Tom arrived.

Below, a tree on the golf course. 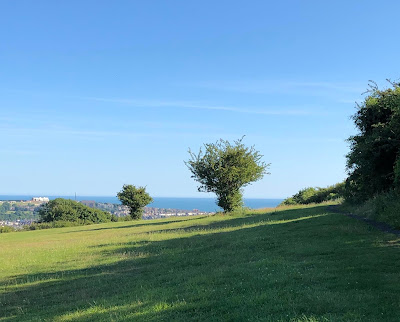