Hanging with the Fam

July 19, 2019
Up and working on the new story this morning. But it is not quite in focus yet. However, no matter as I went down to Preston Park and travelled up to London to meet Toby and Mum. A woman followed me up the platform to give me the tickets I had left in the machine at Preston Park. I told her she was my guardian angel.

After plenty of nice weather, a deluge, luckily I was wearing an anorak as I walked up Tottenham Court Road and went to the Waterstones on Gower Street. I met them in The Dillon's cafe.The Tobster looking well, as was Mum. Coffee there, and then to The Hope round the back of Goodge Street tube where they served rather excellent pies, which I accompanied with a pint of Guinness, while explaining about my diet. Mum declined pie, having eaten a salmon bagel in the cafe, but accepted a pint of cider. Then we sauntered about in London streets simply looking at things and shooting the breeze, before stopping off in a French place where Tobs and Mum had pan aux raisins near a black and white photo of the neon sign for Ronnie Scotts Jazz club on the wall. And French sounding jazz playing in the cafe too, which mum liked. Toby only over for a short time had lots of people to fit in, so will not come down to Brighton, obviously we are going to chill out in Sicily shortly.

Bade them farewell at Leicester Square. I chugged home on the train easily enough, and got home before Lorraine did. Only two days of children left next week and she was almost demob happy.

Below me and Mum and Toby having ducked down a muse and into a wee park called Crabtree Fields. 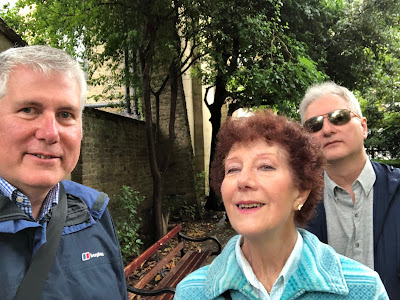