July 13, 2019
Up and Lorraine off to Specsavers for an eye test, that ended up dragging on and on. I went back to the London Road gym again, and did another modest workout. Then home, and once Lorraine was back, having had to pay out for new specs, we drove off to Bolney where the village day was in full throttle. We have been to this a few years on the trot now, and find I quite enjoy it. Was in full Dennis Thatcher mode as people chatted to Lorraine. However a few know me too. Dan, Sarah's husband called me over, and invited me to play a game where you have to hurl boules onto a stump with an egg held in it. The idea is to smash the egg. I managed this and won a bottle of wine, which pleased me a disproportionate amount. Then much mooching about with L talking to a variety of parents and village worthies as children periodically ran up to her, some wanting hugs. Dogs being shown in the middle of the field when we arrived.

I availed myself of a beer in the beer tent and chatted to various folks some of whom knew me. Lots of gentlemen in dresses which seems to be de rigeur for the denizens of Bolney. One of the parents at Lorraine's school, a nice largish man called Luke, with a ginger beard was sporting a fetching blue dress behind the bar for example, while the two blokes who normally commandeer the mics were dressed as Liza Minelli from Cabaret one with his big toe poking nastily through his fishnets.

Home again, and Beth came around this evening, and we had a light dinner of sea bass and salad and couscous and played Scrabble in the back garden and drank gin and slimline tonic. A really nice day.

Below the tug o war, and Beth and Lorraine in the back garden. 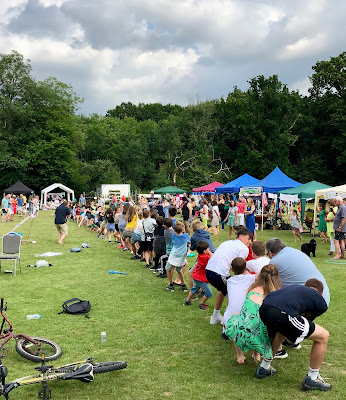 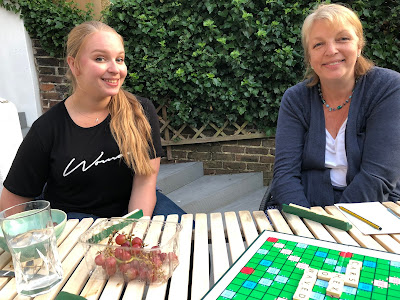