July 30, 2019
The alarm on Lorraine's phone got us up early this morning, and Lorraine volunteered to drive us to meet our guide for the guided tour of ancient and modern Noto. We were to meet him in Noto Antica, the remains of a hilltop walled town destroyed by devastating earthquake in 1693. Getting there proved an adventure, particularly for Lorraine. Guided by google, we were taken down a road that became narrower, and when we began driving across shallow rivers flowing across the road, alarm bells began to ring. We began climbing up the mountain in our little hired Renault Clio, on untracked roads of white rubble, some of which, to Lorraine's horror, had sheer drops on one side. At one point, as the track ahead proved almost impassable, we stopped. Romy ran off and found two women ahead, and discovered the road improved a little. With just Lorraine in the car, we got over the bad patch, and then progressed up to the top of the hill. We had reached the ancient ruined town by the donkey route, rather than the tarmacked front way. Bloody google.

Here we met Italo, our amiable guide, who showed us about remains of the old castle, into the remains of the old church, and what would have been a square little room, which had been a cell, and there were inscribed illustrations mostly of boats and fish. Very practically, however, the rubble of the old town had been carted off to build the new town of Noto. We were shown to a few dwellings, in one of them we saw a rodent of some sort in  a square hole in the wall. After everything looked at properly, and plants smelled and discussed, including round leaved plant that yielded capers Lorraine drove the car through the remains of the old town onto the road. Italo went back to his car, and found that he had left his wallet on the seat with his window open. He said he saw two Italians as he was passing and blamed them for the fact they had robbed his cash, but thoughtfully had left his wallet and cards. His car was also falling apart with bits of his engine hanging out visibly as we followed him back to Noto.

Here we made a short stop to look at a pair of weird-faced lions inside a church that had been salvaged from the old town, and then drove down to the new city gate. Italo told us the new city had been built for chariots and not donkeys. We paused for coffee before setting off to marvel at the splendours of the new city. The ceremonial city gate was decorated with a tower, a dog and centrally a pelican, which symbolises self sacrifice, and by extension Jesus. Apparently pelicans wipe their bills on their chests which leaves a red stain, and old seafarers thought that pelicans were feeding their young pieces of their hearts.

In one church we climbed up the roof of the bell tower to get a bird's-eye view of the impressive buildings of the city, most were churches, a monastery and a nunnery, and a giant cathedral with epic flights of stairs leading up to it. Near that was the palace of a highly wealthy tuna baron, which had wonderfully carved balconies, representing the various forces of nature, the sea and corsairs largely funded by the Ottoman empire, the great threat to Sicily at the time.

Then we bade farewell to Italo, who found us a place in an excellent cafe where we had the Sicilian treat of granita and brioche, this was essentially a bowl of gorgeous sorbets, Romy had almond, Lorraine and Toby had lemon,  and I had coffee flavour, with a lemon flavoured brioche to dip in it. Wonderful.

Then home, to back to I Lentischi to bob in the pool, doze and read after the excitements of the day. In the evening Tina came again, with a new assistant and cooked pasta with swordfish, aubergine, cherry tomatoes and mint, which was unutterably fab, followed by thin, perfectly moist tuna steaks with peppers in olive oil and garlic, with long strips of courgette that managed not to be moist at all. We sat outside again, with candles sharing some wine and eating this amazing feast. To finish this we had cannoli, which is a tube of crispy pastry filled with sweetened ricotta with a dab of pistachio at one end, and a strip of candied orange at the other. These were perfection. Tina enjoying our praise.

After this feast we sat happily about feeling full and sleeping, and we soon shuffled off to bed.

Below, later I discovered that my camera had a moisture stain smack dab in the middle of the frame, which was a bit of a shame. However here are photos in Noto Antica, and the weird-ass lion, and other sites looking down on the city, and Lorraine and Toby and I outside the cafe. I took another photo which managed to include Romy but this was not useable unfortunately.

Photos to come later as I am having problems uploading them. 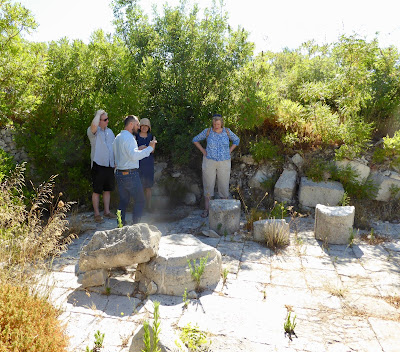 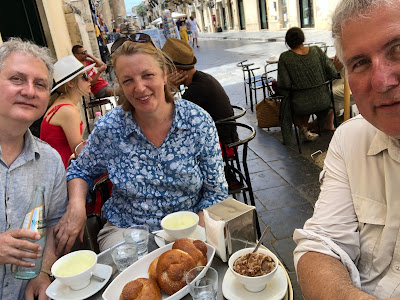 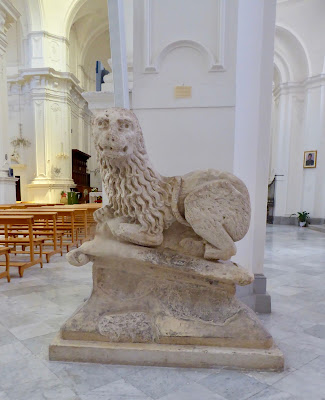 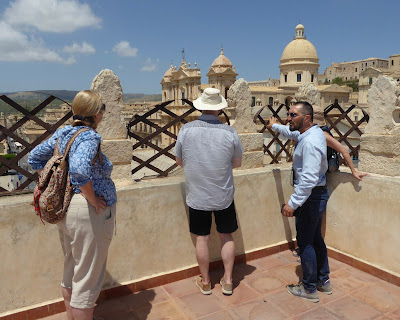 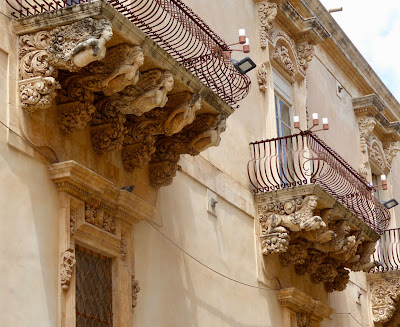 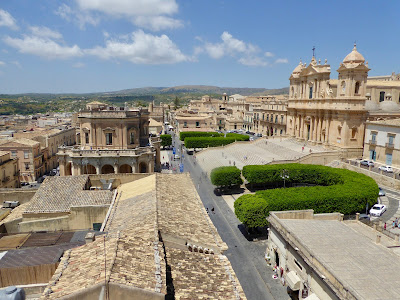