July 20, 2019
Shopping today with Lorraine. I bought some gym shoes that didn't bite my ankles, and some teeshirts. Into Specsavers to pick up Lorraine's new specs, chosen by a computer to suit her face shape. We also went into Marks and Sparks for about an hour, trying on things like teeshirt bras. We chatted to the woman at the till about lightning, and I showed her my lightning app.

Lorraine out with Dawn going up to Bermondsey to see Sarah and JD's new home.

I went to the gym, walking through the park where there were dozens of police gathered to monitor a pro cannabis 'protestival'. There was a bit of music, and several stalls selling cannabis oil and so on. Later I read, several people had their weed confiscated, and there were two arrests. It all seemed a bit heavy handed to me.

and texted Anton who invited me to go around to his house and we sat about in his garden shooting the breeze as he barbecued some bratwurst, which we had with sauerkraut and mustard. Then out for a few drinks here and there, drinking judicious halves and gradually putting the world to rights. Bumped into Claudius in the Eddy, who is back in town after a stint in the US.

An absolute bloody final in the Batty, before Anton went home and I met Dawn and Lorraine from the train. Had delays and adventures with police running about in the train on the way up, but otherwise a very good time.

Below Burger Kings on North Street. 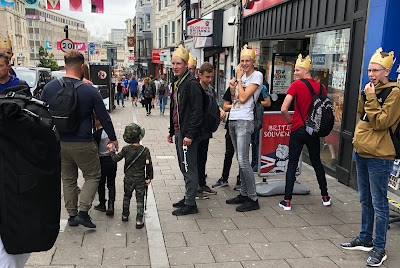 Anton Claudius dawn Lorraine The Battle of Trafalgar The Eddy