Porlocked by a meter man

Got on with work from my French client this morning, after fiddling with some poems. The job fairly easy as I had broken the back of it yesterday afternoon. My French clients seemed pleased with the result, responding with an email that said 'You are Perfect!' which made me smile. Good to have a bit of work, as the big job that was supposed to start today has been bumped for a day.

A man from Porlock interlude when a surly and deeply annoying man unexpectedly arrived to install smart meters. Lorraine had got halfway through filling in the form online and changed her mind at the weekend, but they came anyway. He kicked off by asking me to keep an eye on his car, as if I had nothing better to do. I gave him a permit. When made any enquiry, such as why is the house full of gas smell, he replied mostly non verbally or in two or three words. Then he went and sat outside in his car with the front door open for 20 minutes. When I went out and asked the stupid meter man if we were done, he said no he was waiting for confirmation. From whom or why was never forthcoming. He finished off by saying something incomprehensible about the meter, which Sam was able to translate for me afterwards. I bite my thumb at him.

A walk in the afternoon, listening to the audiobook of Klara and the Sun, which I am enjoying immensely.   Then home to a chat with Mum. She in the past kept journals of all the things they went to see and do, and now they are reading them and marvelling at all the stuff they got up to, and how many times they ate out and so on.

Lorraine and I cooked a simple pasta bake with cauliflower, mushroom and onion and garlic and a cheese white sauce -- with veggie sausages, which we ate with Sam in the kitchen chatting about what foods to buy and so on.  Sam settling in and going quietly about doing Sam stuff in his rooms, and has a cheeky can of beer with us in the evening. All well.

Lorraine and I watched another episode of The Wire from season five. Wincing as McNulty is going off the rails again.

Toby sent me a link to a man called Stephen Prutsman playing one of the more frenzied Yes pieces, Sound Chaser, on a piano. Rather good.

Texts with the Beermonsters before bed. Unsurprisingly they are all for beers in the not too distant future.

A snap from yesterday top, and today, below. Looking down on the i360, aka the iSore. I quite like it from afar. 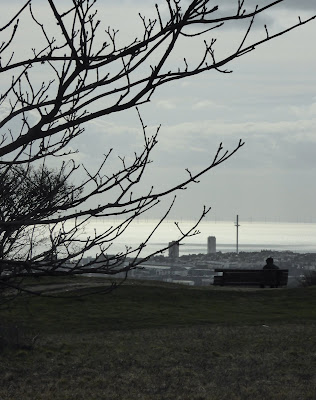 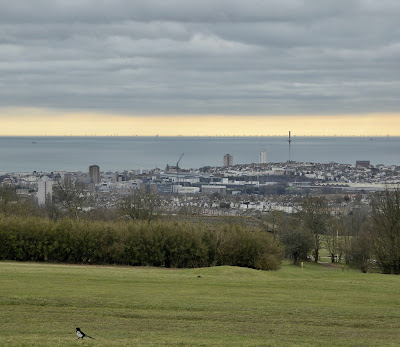