Another weekend in Lockdown, with the sun moving into Aries and Spring quickening. A new year in other words.

Lorraine, needing to recover from a tough week via the medium of chatting to folks on the phone, doing a spot of cross stitch, and computer gaming, and calling on her new games consultant Sam who was able to help her get out of a few scrapes.

Lorraine and I took a couple of afternoon strolls, on Sunday we were up at the Hill Fort, and people sat on the wall itself looking out towards the distant sea as if they were at the beach. Also Lorraine collected baking trays from Argos, which were deployed on Sunday. A game of cards with Sam on Saturday night, which was fun.

I had a few bits to do for the podcast over the weekend, mainly reading translations of poets from around the world. Also a nice note from Trevor in Australia, who said 'I absolutely love this podcast! My only criticism is that there are not years and years worth of past episodes to listen to. This is by far the best poetry podcast I have found. I hope this podcast gets the following it deserves and thrives for many years to come. Thank you to all involved,' which was rather cheering. A few notes with Robin, before we get to record this coming week.

Chatted to Mum on Sunday. She is fine and having the front garden reshaped a bit. Ben has been helpful chasing the guys doing it. Mas off to the dentist this week with a broken gnasher.  Lorraine had to redo our census form as we had completed it a couple of weeks ago before we knew Sam would be with us.

Lorraine and I almost finished the last series of The Wire now, just two more episodes to go. What an amazing series. But particularly sad at the death of antihero Omar Little, a violent Robin Hood style character, who prospered by robbing drug dealers. Having put the fear of God into the scariest people in the underworld, his demise came in a Korean grocery store, when he was shot in the back by a child, a little 'hopper'. 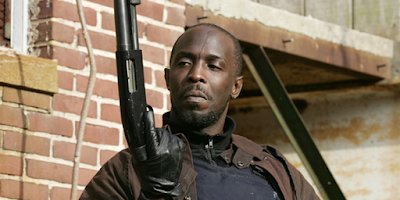