Big news for Kenny Towers today was that Lorraine at last got her jab. I was very happy about this indeed. And will be even happier when she reaches her three weeks afterwards. Lorraine matter of fact about it naturally, although when she got there despite having a booking appointment and so on, she was not in the system properly. However she got one anyhow, and now has to let her GP know. She came home again before going off to school. She had an evening meeting zoom too at home, so a long day for her.

I began work on the big job with Keith with an 8am briefing. I like the people we are working with. It is an oncology related job so the subject matter is a little short on laughs. Keith a bit slowish today, having been called up by his doctor for a jab yesterday afternoon and getting one within minutes. He is quite a bit younger than Lorraine, so it shows how quickly they are getting through folks in certain areas. Keith lives a mile or so away from where I used to live in Kew.

Managed a scurry up to the top of the hill late afternoon, listening to my audiobook and seeing a mischief of eight magpies. I have a secret never to be told. Sam lying low for most of the day, but playing MarioKarts with Lorraine this evening. I said he was welcome to come for a walk with me should he want.

All well. I watched an obscure devotional cable TV show by Alice Coltrane that Reuben sent me, and also listened to a track by Eyraka Badu called Green Eyes, which I was absolutely in the mood to adore.

Below the sun, and a blurry snap of distant magpies. Lots of them. 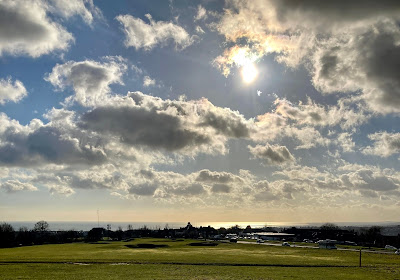 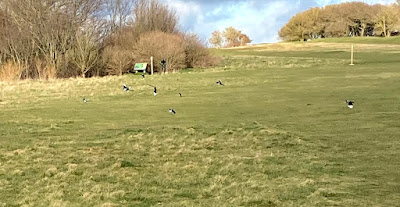