A bright cheery weekend, regrouping after a full week. On Saturday morning, I managed to book Lorraine a date for her jab in a week and a half's time -- a full school awaits her on Monday so this is well overdue.  Great to have it in the calendar.

A couple of walks over the weekend, at the top of Stanmer woods and today in Preston Park, which was very busy, two sunlit fresh days.

Pottering about doing minor chores, and Lorraine photographing some clothes that are going to be sold. The weekend much freer, with Sonia having been in the week, the necessity to do a top to toe house clean now gone. Not much else going on, a few games of MarioKarts, Lorraine wandering about in the caverns of Pode. When I find I am in the mood, I am reading Ramsay Campbell and a bit more of Arthur Machen.

Feeling the need to write poetry now. Robin and I have given ourselves an extra week between episodes -- having reached ten podcasts, to do a bit more interviewing and generally take stock.

Lorraine made an exemplary fish pie on Sunday night.

Chatted to Betty who had returned from a freezing walk along the seafront. Spoke to Mum and Mas, who was giving me pizza envy with a large pizza that had just been delivered. Apparently the neighbourhood is up in arms about evil George next door.  Also a long chat with Tobs, as he was walking about in Toronto as the snow was falling. He said so many people had been in touch with Romy from her past over her new job -- and that he was exploring the idea of becoming a therapist -- but you have to undergo lots of therapy yourself of course. Had a humorous vision of Tobs phoning me in the middle of the night saying something like: you stared at me with fish eyes when I was a child. The therapist says this is unforgivable. God knows having to play him at table tennis when he was a kid has given me hours in therapy :-)

A quick chat with Anton this weekend too. He was jabbed first thing on Saturday morning, and has felt a the standard wussiness after. I still feel a bit tender in the arm where I was jabbed a week and a half later.

Below, a photo of me taken by Lorraine. Lockdown hair is looking terrible. And a photo of Lorraine, who didn't want me to take it because she had no makeup and so on. It was very therapeutic to be out and about. And Rosie sent me a photo of a weasel on a kingfisher's back, which has some claims to being the best picture ever taken. 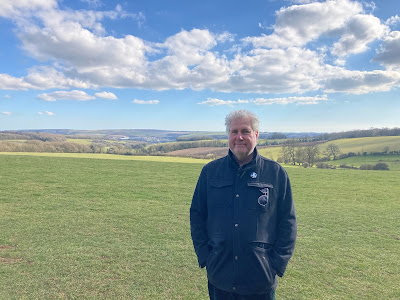 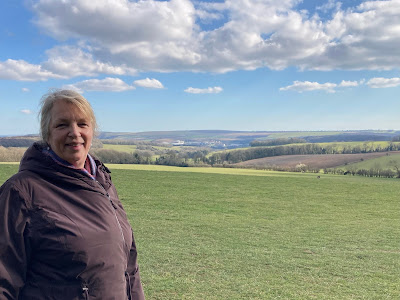 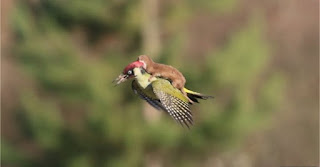