Roofers on the roof

Roofers today, arriving punctually and scrambling up the scaffolding and at their roof business with gusto. Polite hard working guys, one was the son of the owner, and two young Geordies. Once they were about their business, and had done most of the job by the afternoon when they packed up.

While they were working Lorraine and I drove off to the new Lidl in Hove, which has wide isles and we bought a few bits and pieces there, including lagers. It was not very busy, and so it seemed quite a pleasant place, and the prices were great.

The roofers packed up mid afternoon, muttering warily about rain about to come and so on. There was no rain -- it has been very dry here lately. However holes have been covered up in the roof.

Lorraine and I sat in the front room in the afternoon reading and chatting, listening to the front door banging as they carried loads of stuff out. And after they left, we found that the lock had been loosened with the continual banging of the door on the latch. Then a bit later I found damage to the decking. Lorraine texted Darren about these things - it felt a bit awkward as the lads had been so nice.

In the evening we watched Thor: Ragnarok on Jade's recommendation -- which was camp and quite funny. Enjoyable nonsense. Reminded me of first reading Marvel Comics when I was six and seven and living in Neasden.

James has bought Beth a white bicycle, and Beth shared film of her cycling it with a white helmet on.

Below Brian sitting on my chest, with Calliope by my feet. He has taken to sitting on me these days. 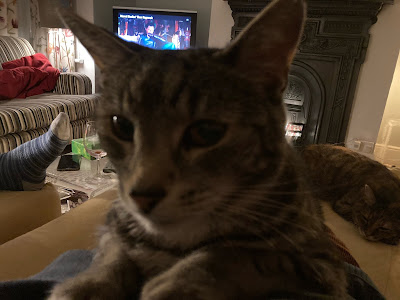