Lorraine's birthday. Up early and had breakfast together before L zoomed off to school. I gave her a pressie of a new iPad and she opened some card and went off to school.

I got down to a day's work with Keith, which was fine, although the job we are working on is hard.  I had ordered flowers to be delivered to Lorraine at school, but these did not turn up on time, necessitating lots of chasing up and they will be delivered at home tomorrow, which rather defeats the point. Luckily however, Lorraine received five other bunches of flowers during the day.

Poor love has toothache however, and is streaming with hay fever at the moment too. However she has an emergency appointment with the dentist tomorrow.

In the evening Anton came round bearing presents for Lorraine, and flowers from Anne too. Anton now a fearless scaffolding monkey scaled up the scaffolding and showed me how to fix the crack in the brickwork around my study window, and reseal the window. This was excellent, and didn't take too long. We had a cheeky glass of beer in the garden with Lorraine, then Anton went home.

I ordered Chinese food from Magic Wok for Lorraine Sam and I and we had a bit of a Chinese feast, and a glass of bubbly to celebrate. Not had Chinese food for well over a year.

Obviously I did not take a photo of Lorraine on her birthday, instead took one of Anton and I on the scaffolding.  D'oh! 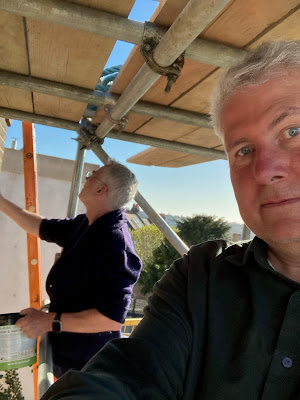