A couple of quiet wins

Felt somewhat stressed first thing. Awake from 4 this morning, with the scaffolding boys arriving first thing.  I cleared the way for them, and was impressed with how they managed to get everything through the kitchen window and out of the house without trashing the place. Meanwhile Mum called to discuss meeting up on Saturday. And Keith texted me about the job -- as he had a bit more to do today.

Things a little calmer after the lads left. Tidied up somewhat, then a bit of to-and fro with Robin till we uploaded the Planet Poetry episode on the dot of 4.00pm. You can hear it here.

Then a few quiet wins. Having appealed their IR35 tax decision, the agency I am working with has now decided I am in fact not an employee, but am actually a person who has worked for themselves since 2007. Grateful to a man called Amir at the agency. This means business as usual (although I have stopped being an Ltd company officially now). Also, the Poetry Translation Centre sent out a tweet about the podcast at last, and will be sending a few more. Nice. Proclaimed to myself that I could not stop winning today.

And in an even less likely turn of events, I went to the Preston Park Tavern, sat on a bench outside and had a beer with Anton, much of our conversation was spent trying to work out when we had last done the same thing. Probably last summer. Having a beer outside a pub felt the most normal thing in the world to be doing, and also quite odd at the same time. Began to get quite cold after 6.30pm and we made off soon after. Anton, dressed in debonair style for an afternoon sauntering about the streets of St Tropez, returning frozenly down the hill.

I went home to a nice pasta dish cooked by Jade, and an evening watching Frasier. All good.

I took a selfie of myself drinking a beer as the penguin onslaught began, looking rough as old man Steptoe. 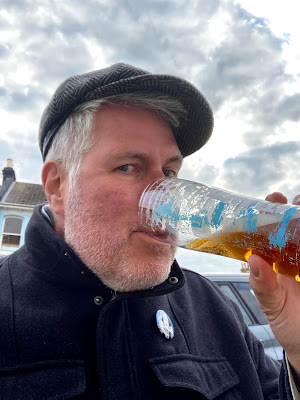