A terrible night's sleep. I am convinced I have a bad reaction to MSG as I woke up with a racing heart and feeling rubbish in the night. Drank five glasses of water and felt a bit better. The food had been very nice, but it doesn't seem to agree with me.

Spent five minutes on a poem before hooking up with Keith today and struggling on with the difficult brief. During the week Keith said to me that X 'could send a glass eye to sleep' which made me laugh lots. Something his grandfather used to say apparently.

Meanwhile Lorraine came home at lunchtime, attended a conference online, received the flowers I had sent several days ago to add to her collection, and then sauntered off to the dentist, which for her is just across Preston Park. I finished my work and came to collect her. Not a great result as she needs root canal work, and in the current climate this will take a while to sort out. Meanwhile she has been given antibiotics. Nevertheless nice to stroll in the sunlight under the gorgeously blue skies we have been having this week with my wifey.

Spoke to Mum today and saw photos of the new path into her house. It looks great.

Home and we ate baby food. I cooked oven chips, fish fingers and baked beans, while Lorraine ate up the rest of her duck pancakes and had some chips too, and Sam had the same as me except with vegetarian sausages. L and I watched Death On the Nile made in the 70s.  I fell asleep on the sofa, which is something I rarely do but I had found it a curiously tiring week.

Below is Keith's face reflecting the unusual thorniness of brief. He lives in a little window on my screen all day. Also a gull sitting on a stump in Blaker's Park, when I had a short walk at lunchtime. 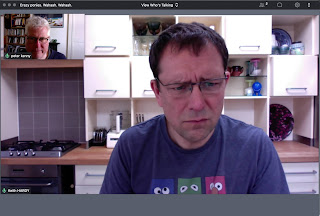 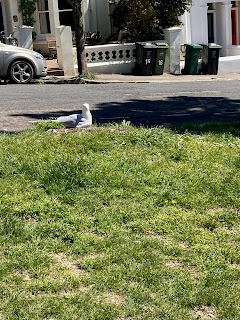