Boules by the seaside

A bad night's sleep. Lorraine and I up early due to the scaffolders arriving this morning. Walking through the house with the long poles and poking them through the kitchen window out into the garden. They got the job done fairly quickly. While this was being done, I quickly sent off notes and tweets and so on about the episodes to various people connected to the last podcast -- then I was free as a bird for the day.

Lorraine went off to see Dawn for a walk. I chatted to Sonia when she came in, then made off to collect Anton, and we walked down to seafront near the Peace statue, where we set about playing pétanque -- unzipping two sets of brand new boules from their bags, his present from his children, and playing on the little ground there is for it. We began to play, and soon there were other groups of folks playing all around us. A cheerful vibe, and it was sunny down by the sea, and it was a fine thing to be throwing boules around without a care in the world for a while, with the sea all blue and cheery on a cool day in the sun. People stopping to watch us at first, which was bit disconcerting, but we didn't disgrace ourselves. Obviously Anton had researched it beforehand and has found that you play to 13 points, and if you are beaten 13-0 the French call it kissing the fanny, where humiliated players must kiss a picture of the derrière of Mademoiselle Fanny. Anton did win all three of our games, however which was a bit Galling (arf-arf).

Walked back to Anton's back garden, and had a cheeky glass of beer there, shooting the breeze before I sauntered home. A cheery evening with my wifey and Sam and Jade. More Frasier, and salmon stir fry which was rather excellent. Lorraine and I opened a bottle of Harveys Old Ale, and a bottle of Harvey's Best bitter and mixed them to create a big glass of Old & Bitter each. Lovely.

Below, a ritual pétanque ritual, read all about it here. 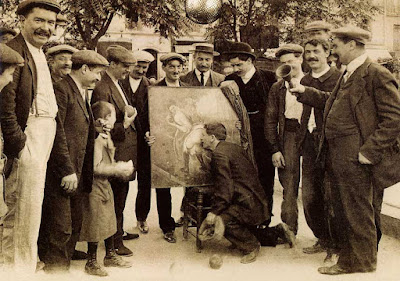