Fog and carrying on

A fun Friday. Did a bit of writing I was really pleased for the first few hours, and then after a snack at lunch, hoovered, washed the kitchen floor and other domestic chores for a couple of hours. Spoke to Anton who while speaking to me was watching heavily armed policemen walking along the street checking under cars. Otherwise he is greatly pleased by having reached his target weight of 80kg after a month of starving himself and drinking nothing.

Lorraine home early, being this week slightly more on top of things, and has been finishing earlier, and was at home before five tonight. We even played some cards, and treated ourselves to woof woof chicken wings and oven chips, washed down with some beers. We watched Sherlock and a French series called Lupin on TV.  Also, quite late, watched a documentary about Dolly Parton, which I weirdly enjoyed.

Spoke to Mum and Mas. I am so happy they are vaccinated but they are as bored and depressed by lockdown as anyone, and stressed by the idiot next door. Mum has been organised about getting in touch with solicitors and so on, but in my limited experience, lawyers are rarely a joy to deal with. Laughing with Mason about how he has taken to enjoying raw cauliflower eaten, naturally enough, with ketchup.

I sent off my latest story Diabolus in Musica, after lengthy editing this week. I also put nine stories in a file and sent them to Tess to proof them. Felt like a baby step towards something. As for the podcast, I interviewed Rhona over in Vancouver Island. Nice to see her and chat. Funny to see her sitting there at noon, when it was 8pm and had been dark for hours here. Robin interviewed Mary Jean Chan whose book Flèche is published by Faber. A good book which I am only now reading.

Walking to the usual places. Passed Stacey my barber in the street, a brief but cheery encounter along the lines of How's business? Terrible. You? Terrible. And then laugh because there is nothing to be done. We all just have to carry on at the moment, and hope for better times.

While I walk, I have been listening to Bleak House, Dickens' classic novel about he delays of law, while walking. His characters are so memorable. Below Mr Turveydrop, 'a model of deportment', bleak views of fog, (coincidentally the book defining opening image for Bleak House). I took advantage of the absence of golfers to lurk on the golf course. Third one down a good snap of the hill fort wall from the south. 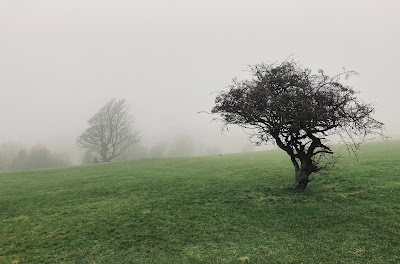 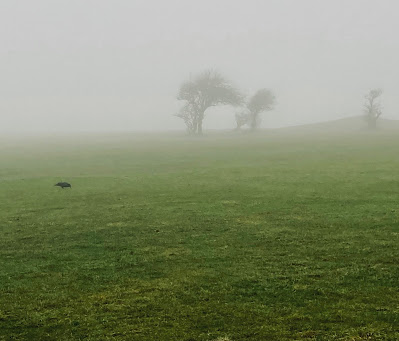 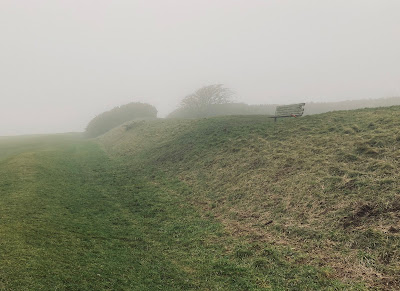 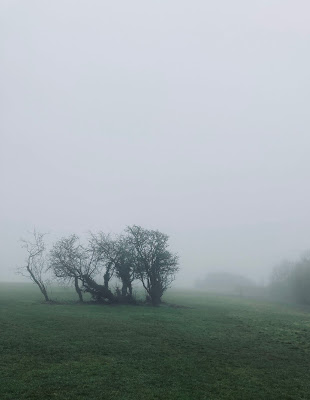