Klaudia's 17th birthday today. Anton said the other day that he told her she was only a year away from buying him a pint in a pub now. Felt sorry I haven't seen her for such a long time. I at least texted her and got her bank details so we can send her some money for baubles and trinkets etc.

A designated day of rest. I began rereading through Rhona's books to prep for our interview next week. Many of them are signed, including one from 1988. We go back an awful long time. A quick spin around the streets with Lorraine at one point, just to get her aired and exercised. Also a certain amount of computer gaming. Loraine downloading something called Pode, and we did a bit of racing about on Mariocarts too.

Lorraine made beef burgers tonight, with real beef. Generally I will only eat beef in a bean jar, but these were delicious. Luckily, thanks to Allopurinol, I am able to eat beef once in a blue moon without getting orc foot afterwards.

Watched a film called The Wife, which starred Glen Close and Jonathan Pryce. Glen Close was amazing, playing the king-making wife who had, in secret, written the books for which her husband was now winning the Nobel Prize for Literature. A sad film though, about how this secret had warped their lives and that of their writer son. Then we watched a mildly amusing rom com called Morning Glory. I like romcoms, as I have said often, especially on planes. Not that there is much chance of climbing onto one of those in future.

Sad to see an outbreak of four people with Covid on Guernsey, which rapidly went into lockdown today. Here? The least said the better.

Now this is what I call a burger... 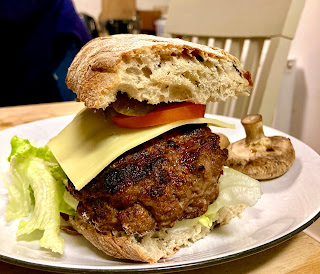