Do what thou wilt

May 11, 2020
A fairly productive start to the week, despite waking up in a fury at the government's handling of C19. Pictures emerged today of people cramming into the tubes again, and this is simply a recipe for a second wave. The ambiguous messaging and botched delivery is astonishing. Most of the agencies in the country could have delivered something better. As the day emerged lots of conflicting interpretations emerging, from within the government, let alone the general populace. Attempted a meme.... 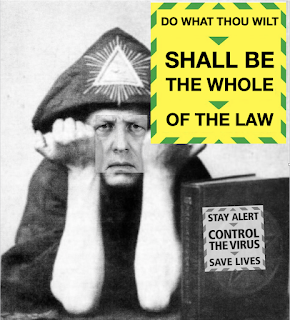 which at least made me feel better.

Lorraine off at school all day. I finished editing, The Dream Home, the short horror story that was published by Frogmore Papers, and the latest Skelton Yawngrave TV episode (I'm now on chapter 24). Essentially I think I am going to read everything onto YouTube, as it is a way of giving published material a bit of a second airing -- and also should I meet a sudden demise at the hands of C19 I want to have uploaded lots of stuff. Also had a really nice WhatsApp chat with Robin about a new scheme/wheeze we are discussing.  Spoke to Carl, who told me that Ellie had resigned from her job in local chippy after six years working there as they wanted her to start work again, minus PPE and so on.

I took myself for another walk up to Hollingbury Hill, and this was gorgeous as it was a cool clear day, and again and I have never seen Brighton looking so clear from the hill, and the Isle of Wight was again visible. The sea shining with reflected sunlight. Listening to The Lord of the Rings as I went, however: disaster. I reached the end of the story, and am now am reduced to listening to the appendices. Spoke to Anton about this today, and he suggests I go the full Silmarillion next, but I think I may have to take a sharp turn.

Below clear air over Brighton from Hollingbury. 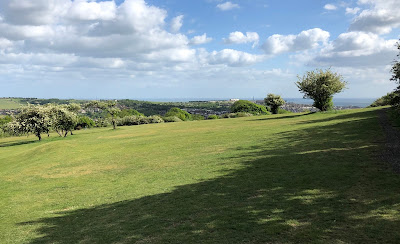 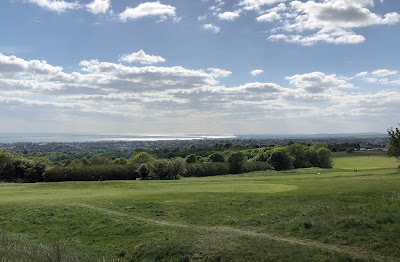