A bit of monstering

May 05, 2020
Another blowy day but a bit of sun. Uploaded one video and in the afternoon, as it was a short episode, I completed and uploaded tomorrow's episode too. Also went for a walk up to Hollingbury Hill and another cheeky stroll around Blaker's Park at sixish. Spoke to Mum, who was telling me about her pal who had cut the hair of his dog and then his whole family. They all have the same haircut.

Investigating government handouts, I have made a little money recently, which means I won't be eligible for anything for a while. I am a Ltd company, which makes things a little complicated. My accountant proactively wrote to me about it the other day, which was good. Had to overcome feelings of gloom over the future. At the moment, however, we have been very lucky and lost nobody dear to us due to C-19. At the moment it all boils down to that.

In the evening a beermonsters zoom call, nice to see everyone's faces. Zoom calls are okay but it is certainly not like going to the pub, and it makes people talk over each other with the delays and so on. Still better than nothing. These gents all okay, Richard writing lots of music. Nick gloomy when he thinks about how there is no chance of playing live as all gigs are obviously cancelled for the foreseeable. Steve seems okay too, but interesting how the chaps were all talking about their feelings. That and The Stranglers, as we were sad about the loss of Dave Greenfield, The Strangler's keyboardist. (Turns out he was from Brighton too, and a big Rick Wakeman fan.) I saw the Stranglers a couple of times in their early Heyday in Nov 77, a month after the release of No More Heroes. My pal Paddy had won tickets to see them in the Hope & Anchor, a little pub venue, and a few days later or before (I can't remember) we saw them at The Roundhouse. It was the height of gobbing, so at the Roundhouse I was very grateful to be looking down on the wave of saliva that arced over the footlights at the band when they emerged.

Below beermonsters all... clockwise from top right: Richard, me, Nick and Steve, and another early purple orchid, inside the ring of Hollingbury Hillfort. 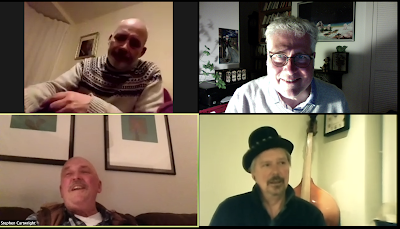 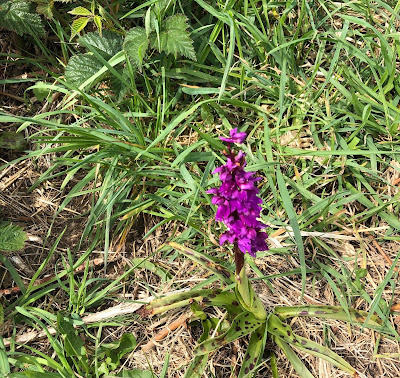