December 09, 2017
Lorraine is scared of few things in this world, but her hairdresser is one of them. We sprang out of bed, after I'd drip fed Lorraine some tea and made some boiled eggs and marmite toast Lorraine drove us off into town, armed with my Santa suit, to be returned to the folks at Beth's drama school, and two cylinders of CO2 for our fizzy water machine, which I replaced as Lorraine hurried off to Paul her hairdresser. A gorgeous morning, cold and bright. Lorraine phoned me a few minutes later, walking to Paul's knowing she was on time, and full of happiness, which was rather lovely.

I ducked into city books, and found a cafe and sent a few messages and emails, then spoke to Janet and Ken and made off to see them, armed with nutty chocolate brownies, and stamps that I picked up for Janet. Nice chat there with Janet, among other things about being a Critical Friend to businesses and practitioners. As I had woken up in the morning thinking this might be a useful thing for me to think about.

Leaving Janet and Ken, I walked back and sat in the window of Paul's salon as Lorraine had her hair perfected, and minutely sculpted, especially at the back. I was a bit disappointed as Paul's dog, Henry, wasn't in a singing mood. Apparently he sings a good deal. Lorraine then sprung out into the world with lovely hair.

We met Beth for lunch and went into Foodilic which specialises in healthy salads and so on. I fancied a healthy salad. Felt all cheery after seeing Beth. I love my life in Brighton, and being able to pop in and see people, and meet people for lunch and so on. I am very lucky. Contacted Anton, who is in bed with a nasty Man Flu.

Then Lorraine and I mooched about buying a birthday present for John, and then went home. A brief bit of downtime, then we walked down to New England Street, where James was exhibiting some his art. Some of my favourite local artists where there including John Dilnot, who made my box of owls, and Heike Roesel, who showed Lorraine and I how she makes her prints and the etched surface of the plates, which were very beautiful in themselves.

Lots of walking today. Left my phone at home for our second expedition, which meant I didn't get a full count of my walking. Oddly irritated by this, as I would have smashed my 10k paces today.

Walked home with Lorraine and Betty and we ate the roast chicken that had been in the oven, and then Lorraine and Betty spent much of the evening plotting food for Christmas, and making lists and having a thoroughly good time. I sat with them, sipping a little bottle of beer, putting tunes on and it was a happy end to the day. Beth leaving for home at the end of the day.

Below, Lorraine pulling a strangely obedient face while having her coiffure done. 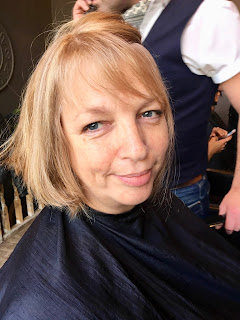