December 29, 2017
Woke up in Edgware late, and went down to find Mum and Mas up after the talkative carer had been. Dawdled over breakfast of coffee and toast, chatting. Mas sharing his opinions about the badness of tattoos among other things. With weird weather over the UK today, lightning, snow up north and heavy rain down south Lorraine and I left at around noon, after fond farewells with Mum and Mas, and we left clutching a bag of Christmas goodies.

A slightly different route home cutting out a congested slice of the M25 pie. Despite heavy rain and water on the surface of the M25 we got home safely and the journey was much faster. For the first time in my life I had a conversation with Lorraine almost entirely in motorway numbers... yes we follow the M4 for a bit, then onto the M25, and head south on the M23. One day I will be able to talk to men at parties.

Once we'd had a cup of tea at home, said hello to Sonia and thanked her for the cake she left us, made to her Bulgarian recipe. We bussed into town. Lorraine bought socks, and I got my specs fixed. Lots of time trying to get someone to rescue Lorraine's iPhone. But despite trips to EE and to the Apple store where we talked with three geniuses for an hour, we liked the most senior 'genius' we spoke to at Apple who was from Toronto. Got no further with the phone, though. It seems Lorraine will have to revive on of her old ones.

Despite this,  Lorraine and I really enjoyed mooching about together. We hopped on a 5b and got off near The Shahi, where we strapped on a nosebag. Nice how, despite not being there so often, they still know us and what we like. Sloped up the hill home, and spent a quiet night together at home on the gold sofa, with the Christmas tree lit up, and some Vic and Bob on TV. All good. 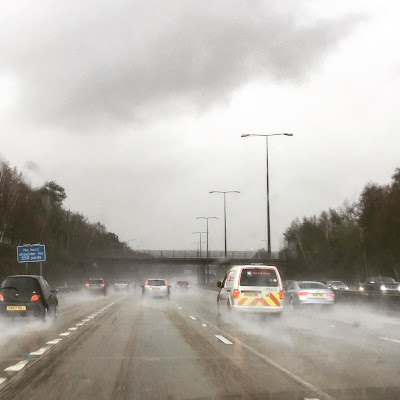