A beano at The Bottom's Rest

December 19, 2017
A few emails this morning then to Hove by bus. Feeling a mite less sore throaty and foggy headed, and relieved to receive confirmation on the bus that some of the doubloons owed me will tumble into the PK Ltd coffers tomorrow.

In Hove I bought a box of cheap co-op crackers, and headed to The Bottom's Rest for the long-planned freelancer's beano.  An excitable Rosie giving me a big hug at the door. It was just 12:30 so the pub was empty, except for us. It filled up a small amount later.  We had planned the beano as a kind of works outing for freelancers, and it was a great success and I think we will do it again next year too.

Sadly both Tanya and Innis were down with lurgies, so I was forced to soldier on with the beano surrounded with five amusing and interesting ladies (soon in paper hats and reading terrible jokes). They were Catherine, Rosie her lovely sister Emily plus their pal old friend The Original Rachel, and another friend called Julia. Catherine enjoyed meeting everyone too, having only met Rosie at our wedding. Anton phoned at one point, asking yet again what my postal address was, and Keith phoned too about a possible job at the beginning of January, but I want to focus on my stuff first.

Original Rachel an old university pal of Emily's, and Julia a lively outdoorsy person who had worked in education and has started a business that combines therapy with walking through landscapes. When the party broke up at around four, Catherine and I walked back through town chatting about how much we had enjoyed ourselves.  Fond farewells with Catherine, and then I bussed back from St Peter's Church. Lorraine out, so I had a mellow evening binge watching a depressive and oddly compelling cartoon on Netflix called BoJack Horseman. I watched the first couple of episodes and almost gave up on it, but it gets rapidly better.

Lorraine home, after seeing pals, and we were happy that she had only one more day of school. Both very pleased about that.

Below our table reservation, made by Rosie. 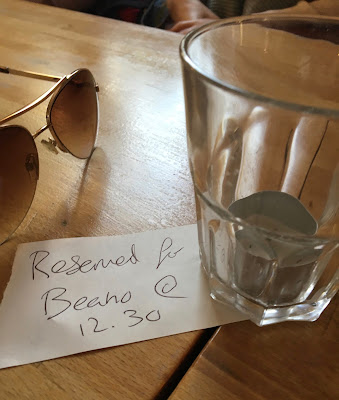