December 25, 2017
A day of high industry, wresting the turkey from the shed where we had stored it overnight, and hurrying it into the oven, breakfasting on salmon bagels, a good deal of vegetable peeling etc.  I also phoned Mum. Then we began opening presents, which was great fun. Beth and Sam taking it in turns to be Christmas Elf. I'm particularly pleased with the year's membership to the Tate, which means I can delight in the Crane-brothers joy of going to the private members rooms at Tate Britain and Tate Modern, while non members mill fretfully in the galleries below.

This done, more frenzying around till Pat and I went to the Preston Park Tavern, to be joined by Sam, for a drink. When Pat and I entered, the place was teeming with small children. As many children as there were adults. We sat outside, as it was mild and breezy, but with the outside electric fires on. An interlude of calm, then we sauntered home in the stiffening breeze to plunge back into the festive maelstrom.

Enough Christmas food of both vegan and non vegan varieties, to feed twice as many people as were actually there. Our table was made of Sam and Jade, Sian, Beth, Pat and Maureen, Lorraine and I, sporting paper hats and much knife and forkwork. Really nice to have Sian with us this year.

In the evening I quietly disposed of the carcass, cutting all the meat from it, then making a huge pot of bay leafed stock with turkey bones, which I bubbled merrily for several hours. I discussed with  Maureen, glinting at the eye, just how easy it was to dispose of bodies.

Everyone groaning with food, and out of energy in the evening. Much television watching. Having eaten and drunk enough for four Peter Kennys I needed to be active, so I cleared up the kitchen, and washed everything up while listening to a bit of Jazz. Beth came too for a while and sat with me. Eventually I felt a corner opening up for Roquefort (king of cheeses) and wine.

Sam, who has gone down with some lurgy today, spent some time in bed. Sian, Jade and Sam off in a cab to Hove late in the evening, Pat and Maureen and Beth went to bed, and Lorraine and I sat on the gold sofa sipping a little wine and gradually powering down. It had been a successful and cheery day, though hard work.

Below Pat, Sam, Maureen, Betty and Jade and Sian. And a snap by Jade of her and Sam. For some reason I did not snap Lorraine or myself. 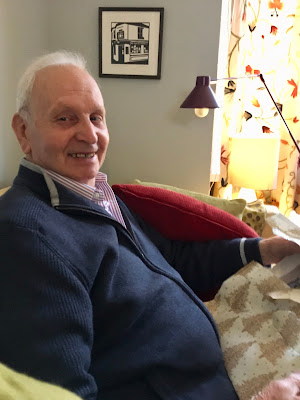 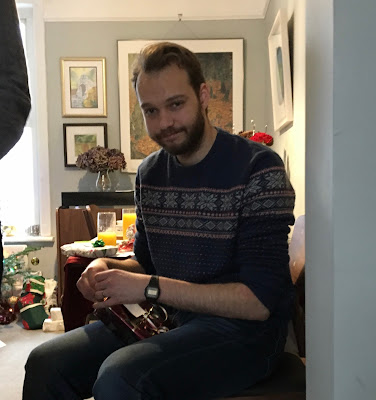 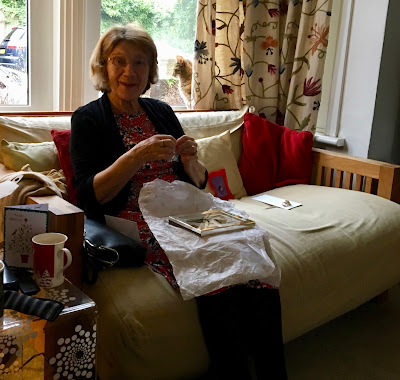 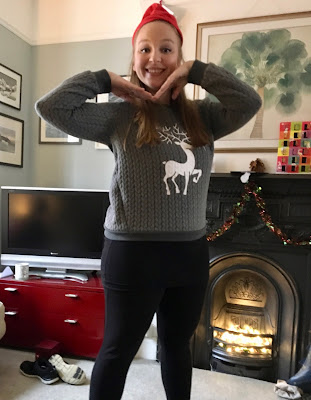 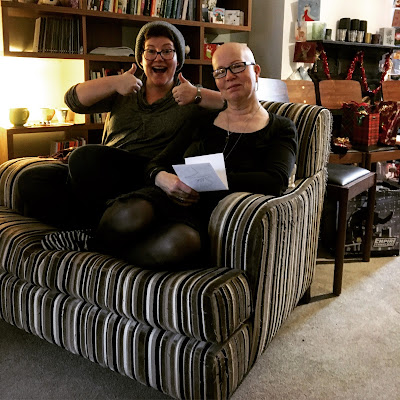 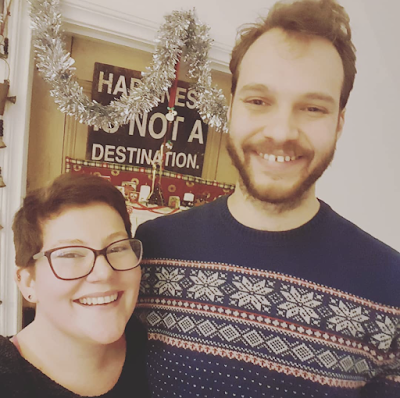