December 02, 2017
Up and off to Bolney today. Once I was up and had a cup of coffee, I felt utterly brain dead and could hardly think for a while. Tiredness coming in waves, like it does with jet lag.

Lorraine's school having its Christmas fair to raise money for the school, so lots of people setting up stands and parents and children zooming about. My part was to be Santa. I arrived early with Lorraine and then lurked in Lorraine's office, before changing into my Santa outfit.

The clothes not too bad, but the beard, which had been bought separately was wild in a nylon way, with a odd rictus for a mouth. I was led by two elves around the school, ringing the school bell ho-ho-ho-ing it up, and then I was led to my grotto, and sat there for a couple of hours chatting to children in the character of Santa. This went remarkably well, and for the most part the children were chatty, one or two were dumbstruck by the large red apparition, but all went well. A couple of ontological debates around the existence of Santa, which I managed to come out well in. I decided to ask children about what they found most magical about Christmas, and received a variety of answers, including: giving to other people, and seeing my relatives, as well as the getting of presents. I advanced the theory to some children that the answer was in fact brussels sprouts, but I had few takers in that. Was photographed severally by parents with their children. I think I had as much, if not more, fun than the children. I have always loved Christmas, and being part of it for dozens of children, in a steady stream for two hours, was a privilege.

After this, Lorraine led everyone in getting the school ship-shape again. Then some of the locals invited us to the pub across the road, and we went there for a quick drink afterwards. People clapping Lorraine as she came in, and I was bought two beers in appreciation of my Santa skills. One person said that I was very professional. It's a job with a future.

Then home, and we went to The Park View pub for a quick drink and a bite to eat. Then home, worn out again and an early night.

Below struggling with the Santa beard in Lorraine's office before being unleashed on the world. 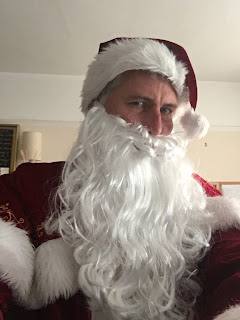