December 07, 2017
So up early and after Lorraine and I scarfed some porridge, I began writing copy about an unpleasant inherited medical condition for an app. No travel today, thank goodness. The weather ghastly outside, windy and rain. I thought I'd be done by lunchtime, but it took me till mid afternoon. Broke off for a short walk before it started pouring, and had a couple of coffees. After completing the first draft sent it off to Pat, and then began watching a documentary about Voyager missions. Fell asleep and woke up an hour later, with things to be done, but luckily Pat was going to get back to me tomorrow so my sudden narcolepsy did me no harm.

Jenny, our next door neighbour popped in to say she was moving house next week. I like Jenny, though she is very shy.

Lorraine came home early, and we caught the bus into Hove where we met Betty in the Paris House, after a hard day of elf-work in Churchill Square. Betty doing well as an elf, and has already had to step up as team leader. Apparently they had an excellent Santa today, who knew the names of all the reindeer. I was taking notes.

Then we popped down to the Bottom's Rest for a bite to eat, some chicken wings salad and fries. Lorraine and I then bussed home, or rather bussed to the foot of the hill then walked home. Very unusual to get Lorraine out in the week, and despite her feeling guilty, she really enjoyed herself. We went straight to bed when we got back.

Below, a view out of my rain-streaked study window, and a snap of a Ho Ho Ho from the bus with me reflected in it. 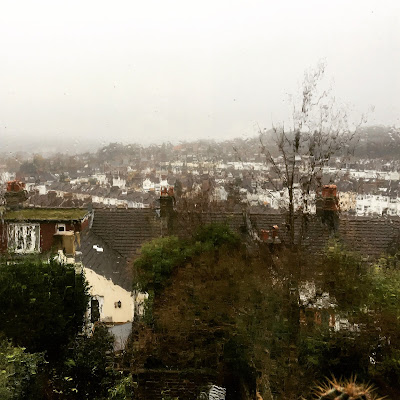 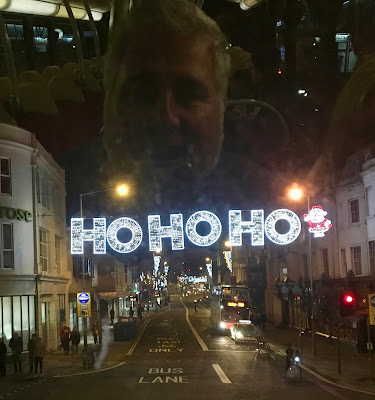