Lots of conversations today, chatting to Mum who had got the card I had sent her using her own painting as the design for the front, to Carl who was chipper, and it was great to hear from him, and Anton. Meanwhile Lorraine spoke to her brothers Ken and Derek, and Laura and Claudia, and a quick chat with Sam, and Pat and Maureen.

A clear but cold day. Our bird-free bird bath had ice in it all day. In the afternoon we made off to Hove, and Lorraine had to scrape ice off the car's front window. We met Beth and James outside both in shades and bobble hats and looking like skiers. They stowed a microwave they had picked up for us in the boot. The last one was on its last legs, and Brian  having sprayed on it, so that despite thorough cleaning, when you started to use it it emitted a distinct and unpleasant smell. It simply had to go.

We went for another bargepole style walk, to the seafront as the sun began to slide towards the sea, and the last light of 2020 was beginning to look quite pearly over the water. We went to Rockwater, where it was possible to get a drink from a stall, if you used an app. Very crowded, with people dotted about on the beach drinking. Lorraine and I found a place to stand well clear of anyone,  and Beth and James picked up three hot chocolates laced with Cointreau in two cases, and a hazelnut liquor for Beth. I had a can of craft IPA, which was a fruity zingy change from the Heineken I have been sipping lately.

Walked back to the car, and said a distant but fond farewell to Beth and James, and drove home. Both of us icy cold by then.  Once home, we had chicken in woof woof sauce, and french fries, and set up a zoom meeting where we hooked up with Beth and James and Innis and Rosie and played Linkee. I don't think we ever got to the end of the game. A little bit of Jules Holland after midnight, and we had bade them a happy new year. I am not a fan of champagne however, we had been given a bottle of Veuve Cliquot brut for Christmas,  and I discovered I do like champagne, as long as it is this one. Lorraine and I sitting at the table most of the night eating stilton and drinking and playing the endless game, but it was all quite a laugh.

A few fireworks going off outside. Meanwhile the UK quietly left the EU at midnight, delivering the country's worst self-inflicted wound in living memory. What a year.

Below a deranged looking photo of me, and Lorraine and Beth and James in the distance and out of focus.  The last light of 2020. 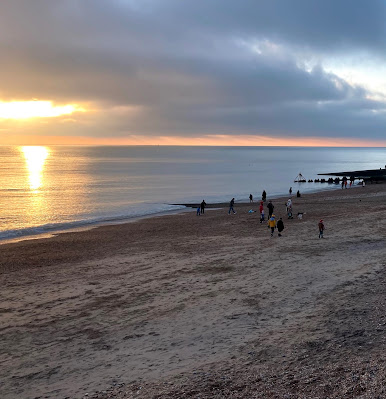 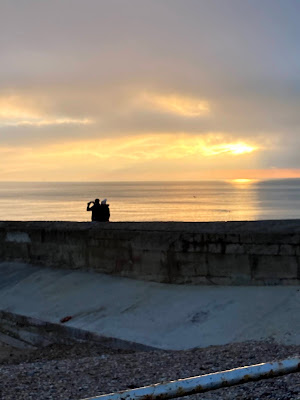