So a bit of writing first thing, polishing up an old story A little quiet time for republication and doing some podcast bits.

Then off, just before lunch, with Lorraine to her school, and preparing for a day of Santa banter. Feeling a little nervous to be honest, before I started getting into the red clothes in Lorraine's office, while Lorraine was busy running around being a busy headteacher in the time of a pandemic. This time I had  an immense nylon beard with elastic hoops to put around your ears. Lorraine then pinned my green facemask onto it, with authentic plague chic.

Usual ontological debate about whether Santa exists or not, which I simply refute by being there. Also the how do you get everywhere on Christmas eve? questions. (Answer: with great difficulty).

One kid called out 'haven't you been arrested?' when I walked into one class, which threw me. The older ones have to be approached with a degree of knowingness. They are happy to play along, but ask testing questions, such as: what was the most unusual gift you've ever delivered? My answer: a tadpole because it was out of season, or I saw you in a film doing x, to which the correct response is to sigh and say that when you are as famous as me, you get used to misleading portrayals. The wee children, true believers, were wonderful some of them open mouthed with astonishment. The middling ones were best of all, and when I told them my reindeers were called Steve, Colin, Doris and Bob, drew a storm of protest.

Also went out to meet the reindeer (a pony with antlers outside). All rather fun, and hopefully next year I will have my elves and grotto back.

A chat with the beermonsters tonight, as it was Richard's birthday. Steve saying he is enjoying the podcast, the gentlemen all looking forward to being able to return to the pub again. Richard told us that Steve and I had been banned from The Evening Star after our last visit when Steve had the temerity to go into the pub for a wee after 10pm apparently a barring offence, and me rather more deservedly for swearing at the barman while he was being obnoxious. Steve and I amused by the idea of ourselves as outlaws.

Below not allowed to show the children or their wee faces unfortunately. I was a bit worried that I might scare the children looking like this, but none were alarmed. 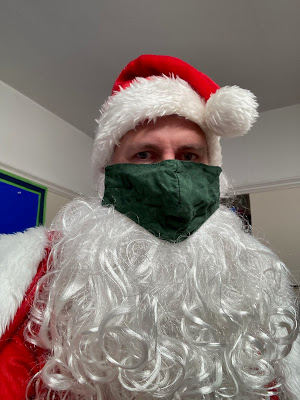 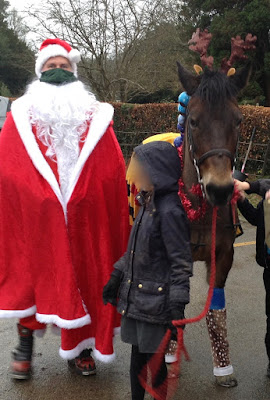 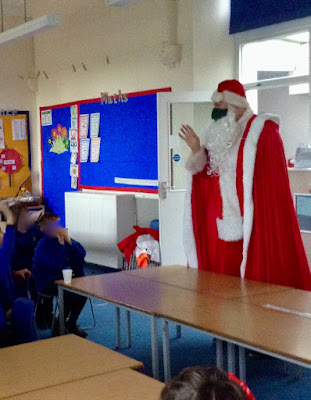